Phosphor bronze strings are commonly used steel strings. Many musicians favor these strings because they lend a deep, warm tone and can help mitigate an instrument that has an excessive high end. They might not work as well on guitars that already have a more pronounced low end. Phosphor bronze strings are composed of 92% copper and 8% zinc, and they tend to be more resistant to wear and tear that can occur from natural oils on a guitarist's hands. They're excellent for rock, country, and pop.

Audio Assemble places Cleartone strings on their list of top picks. These strings are available in bluegrass, extra light, custom light, and medium gauges. They're coated with polymer to protect them from corrosion. Cleartones cost a bit more at around $16 per pack, but because of their coating, they'll last a long time. If you're a guitarist who doesn't like coated strings, you still might want to try Cleartones, since their coating is quite light and has been patented as "No-Feel." They'll give your tone stunning clarity with plenty of warmth. Professional guitarists such as Craig Wayne Boyd and Brad Smith love these strings. 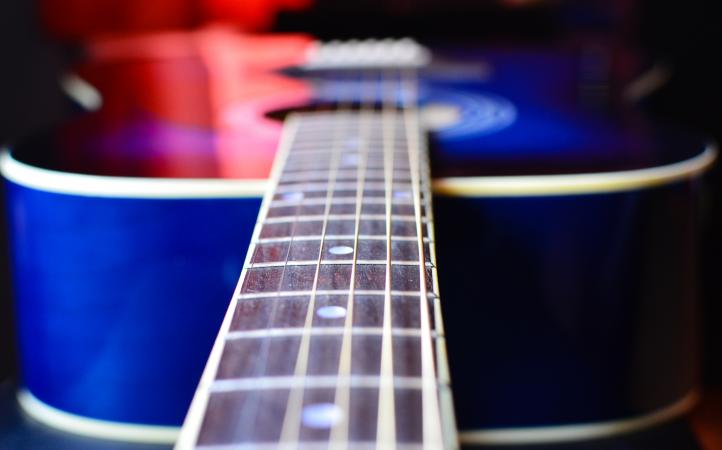 You'll find D'Addario EJ17 phosphor bronze strings on lists of the best strings for acoustic guitars such as those from Guitar Fella and Audio Assemble. You can choose from a wide range of gauges with EJ17s, whether light, medium, or heavy. The medium gauge EJ17s are D'Addario's bestsellers for acoustic guitars, and since you can get three sets for about $18, they're a good value. While EJ17s are great for beginners, experienced guitarists might want a more distinct tone. Since they are uncoated, they might not last as long. D'Addario strings are favored by artists such as Dave Matthews, Vince Gill, and Jim James of My Morning Jacket.

Martin Lifespan SP strings earned a place on The Acoustic Guitar Guide's list of the best acoustic strings. They're medium-gauge and are recommended for beginners or for people who are tough on strings. You'll find them a good deal, since you can pick up a set for about $12. They have a well-balanced tone, offering both brightness and growl. You'll also get good longevity from these strings, since they're treated with a coating technology called Cleartone. An impressive roster of well-known artists use these strings, including folk rock band the Avett Brothers and reggae musician Aaron Nigel Smith. 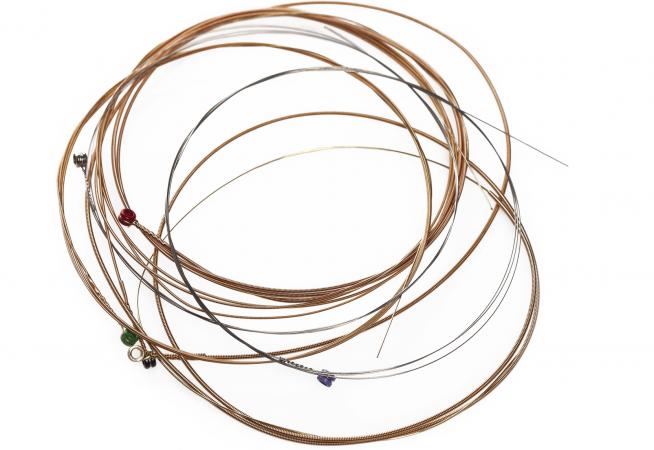 Ernie Ball 2146 Earthwood strings are cited as top-notch guitar strings on lists compiled by Guitar Fella, EquipBoard, and Thoroughly Reviewed. EquipBoard recommends the medium-light gauge strings as a good starting point. These strings are favored by artists with star power like Paul McCartney, James Bay, and Brad Paisley. They're celebrated for their resonant, clear sound as well as for having a pleasant feel when you play them. Their thin coating will prolong their usability, and they're a good deal, too, since you can pick up a set for around $7. Elvis Costello is a huge fan of these Earthwood strings.

EquipBoard also recommends John Pearse 600L phosphor bronze strings, particularly in the light gauge. In this set, the two thinnest strings are plain, and the other strings are wound. These strings are touted as excellent on all levels: tone quality, playability, and longevity. A reviewer on JustStrings calls them the "Holy Grail of Tone" for their crispness and resonance. They're a great value, too, at about $7 per set. The only real drawback of these strings is that they can leave a dark residue on your fingers since they're uncoated. 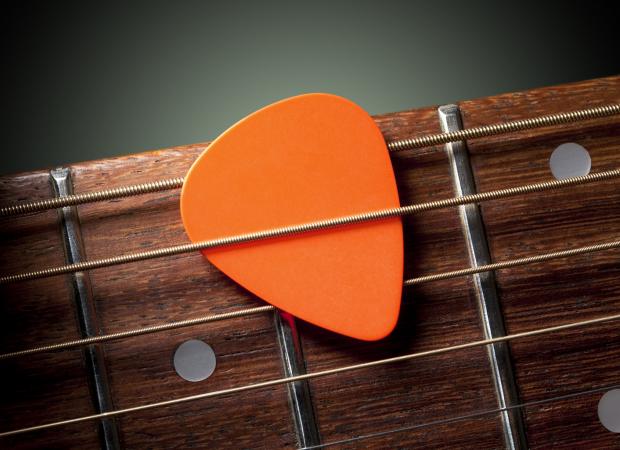 Many guitarists favor 80/20 bronze strings, another type of commonly used steel string. Made up of 80% copper and 20% zinc, 80/20 bronze strings are not actually bronze, but brass. With their bright, ringing tone, they will tend to boost your guitar's high end. They are a great fit for guitars such as jumbo models and dreadnoughts which already have a great deal of inherent low end. Like phosphor bronze strings, 80/20 strings are good choices for the country, pop, and rock genres.

Elixir was the first company to start coating strings with polymer to boost their longevity. Elixir's Nanoweb strings are a top choice for acoustic guitarists, and they consistently appear on lists of the best strings such as those from Guitar Fella, Thoroughly Reviewed, and E-Home Recording Studio. The Nanoweb coating is extra-light to deliver a bright sound similar to that of uncoated strings. EquipBoard recommends Elixir Nanoweb strings in the light gauge. They are pricier than other acoustic strings because of their coating technology, but you can purchase a set for around $16. These strings were a favorite of fingerstyle master Pete Huttlinger.

E-Home Recording Studio cites Martin M150 bronze acoustic strings as a top choice. The M150s are a great choice for guitarists of all skill levels, and they are affordable at around $14 for three sets of strings. For 175 years, Martin has been one of the most highly regarded manufacturers of guitars, and their top-quality strings are used by luminaries like Eric Clapton, Anthony D'Amato, and Adam Levy. The M150s are available in several gauges including extra light, light, and medium. As non-coated strings, they'll bring a crisp, ringing sound to your guitar, but they are not as comfortable to play and might not last as long. They're ranked number one on Best Reviews Guide's list of the ten best strings for acoustic guitars.

Elixir's Polyweb strings get high marks on the Guitar Fella and E-Home Recording Studio lists mentioned earlier. They're more heavily coated than Elixir's Nanoweb strings, but the coating enhances the longevity of the strings, provides a warmer, richer tone, and gives a boost in playability, since the coating feels smooth and gentle on your fingers. Guitar Fella recommends the extra light gauge for these strings for maximum tone quality and playability, and you can pick up a set for around $15. These strings are appreciated by jazz guitarist Massimo Varini and country artist Sarah Jarosz. 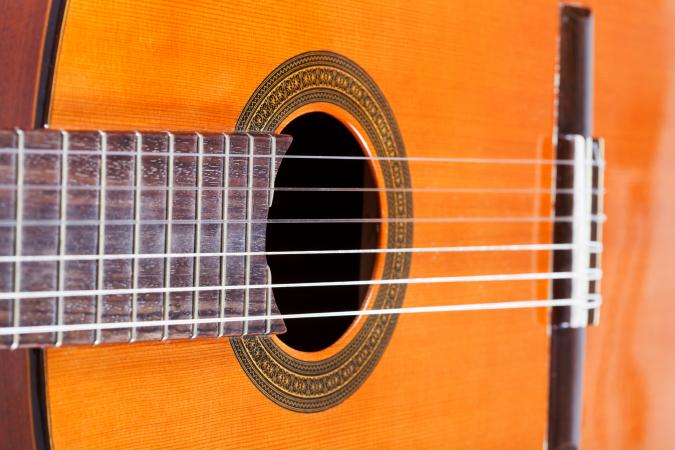 Guitar Fella's list of the best classical guitar strings and EquipBoard's rating of nylon strings agree, on their lists of the best nylon strings, that D'Addario EJ45 Pro-Arte strings are a number one pick. They are some of the best-selling nylon strings in the world. Due to their normal tension and excellent balance, they're well-suited to a wide range of classical guitars and guitarists and provide a tone that offers outstanding clarity and volume. The strings are plain-ended, and when you put them on your guitar, they require tying, but that will be no problem if you're experienced at stringing your guitar. They're affordable, at $7 per set. Artists who favor these strings include Chico Pinheiro and Carlos Rios.

If you play folk, jazz, or classical music with a fingerpicking style, you'll love Ernie Ball Earthwood Folk Nylon Strings. Guitar Fella and EquipBoard rank these Earthwoods high on their lists of the best nylon strings. They're medium tension, and though they are nylon strings, their wrapping is made up of 80/20 phosphor bronze, giving them a uniquely bright, resonant tone that differs from traditional nylon strings. These Earthwoods sound particularly nice when accompanied with vocals. You'll also notice that, because of their distinct construction, they'll take longer to settle into your guitar. A set of these strings will cost you about $6.