If you play electric guitar, you'll want to know as much as possible about how to choose the best strings for your instrument. A number of factors come into play including tone, playability, and string longevity. While people's preferences will vary, many guitarists and experts tend to agree about the strings that are the cream of the crop as well as which factors to consider in making your choice.

If you peruse lists of the best strings available for your instrument, you'll quickly discover some that consistently earn kudos from such sites as Music Industry How To, Music Radar, Equipboard, Guitar Fella, Thoroughly Reviewed, and other similar sources that are in the know. Overwhelmingly, these strings tend to be either nickel-plated steel or pure nickel strings. They're recommended by well-known guitarists and respected guitar-related publications for their top-notch quality and stellar sound.

Ernie Ball 2221 Regular Slinkys are some of the most popular guitar strings available, with legendary musicians like Steve Vai and Eric Clapton as fans. These nickel-wound strings have a nice, balanced tone and are rugged and dependable. The Regular Slinkys constitute GroundGuitar's highest recommendation for top-notch electric guitar strings, and Equipboard calls them a true "industry standard." Guitar Fella recommends the Regular Slinkys since they're tens, a sturdy medium gauge that still lets you do bends and other guitar acrobatics. The Slinkys are a great value, too, since you can get three packs for around $13.

GHS Boomers are played and loved by Seymour Duncan, who co-founded the Seymour Duncan Company, and Tommy Shaw of the rock band Styx. Boomers are nickel-plated, roundwound strings with a bright sound, and they're known for their smooth, balanced feel. Playing With Chaos lauds Boomers, saying the strings "seem to play themselves." TopProducts includes Boomers in their list of the best guitar strings, calling them GHS's "flagship strings." You'll love their price, too, which is around $4 for a pack.

If you're into a warm, vintage sound, you'll want to try out Fender 150 strings. As pure nickel-wound strings, they hearken back to old school classic rock and the glory days of electric blues. Guitar Fella likes these strings as tens, a medium gauge, and deems them a great match for all kinds of genres from rock to blues to jazz. Premier Guitar praises the strings for their "warm, even, unadulterated tone," and they're Mike Auldridge's pick for the best pure nickel strings. You can pick up a set of Fender 150s for around $10.

D'Addario's EXL110 nickel-wound strings are included on numerous lists of the best guitar strings. They rank number two on eBay's list of the top ten electric guitar strings and are honored as one of two runner-ups on GroundGuitar's list. These remarkable strings are D'Addario's top sellers and are used by Robben Ford, a celebrated blues guitarist who has been nominated for five Grammy Awards. These strings are lauded for their resistance to breakage and for their ability to stay in tune. They're a fabulous deal, too, since you can get ten sets for only $33.

If you want strings that will last a long time and you're willing to pay extra for them, you'll want to check out Elixir's Nanoweb strings for electric guitar. They've earned high praise from professional guitarists all over the world, including Wayne Sermon, Derek Jones, and Jack Antonoff. They're one of GroundGuitar's two runner-ups for the best strings for electric guitar. Nanowebs are nickel-plated steel strings with an extra-light coating to protect against corrosion. Elixir also provides anti-rust coating on the three thinnest strings, which increases their lifespan without sacrificing a bright sound. A set of these fine strings will cost you about $13.

If you're in the market for top-quality, extra-light strings, you'll want to check out Jim Dunlop Rev Willy's electric strings, which Music Radar lists as some of the best guitar strings in the world today. These soulful, nickel-plated strings with their big Texas sound are sevens, which means that their thinnest string is only seven-thousandths of an inch in diameter. With strings this light, you can do a lot of experimentation with vibrato, hammer-ons, and bending. ZZ Top's Billy Gibbons, who collaborated with Dunlop to create the strings, calls them "hot, blue, and righteous." You can get a set for around $5.

Top Ten Select includes DR Veritas on its list of the ten best strings available for electric guitar, which is quite an honor considering the strings are relative newcomers, having been introduced in 2016. Guitar World magazine praises DR Veritas strings, saying that new innovations in their construction deliver top-notch performance and tone. The strings feature what DR calls Quantum Nickel wrap which makes them extra-rugged and durable. Artists who have become fans of Veritas strings include Melissa Etheridge, Stefan Grossman, and Ray Adkins. You can purchase a set for about $9 per set.

Equipboard reports that D'Addario's NYXL nickel-plated strings are the best strings they've ever tried for electric guitar. Music and Sound Retailer magazine named NYXL strings the best guitar accessory of 2015. They're more expensive than many other strings at $13 per set, but you might find that they're well worth it. They're built to last, thanks to the carbon steel alloy used in their manufacture which ensures that they sound wonderful and that they stand up to intense playing. Celebrated guitarists who love the NYXL strings include Lenny Kravitz, Joe Satriani, and Josh Klinghoffer of the Red Hot Chili Peppers.

DR Neon Multi-Color Strings rank number nine on eBay's list of the top ten strings for electric guitar because they combine a bright sound with durability and can stand up to metal licks and riffs. They're also a good choice for beginning guitarists. In a set of Neons, each string is colored with a distinct, vivid hue, making it easy for new students to learn to play the guitar. Dan Miller of Flatpicking Guitar Magazine, concurs when he writes that teachers can simply say "play the orange string," and students know exactly where to go. These high-quality, nickel-plated strings are coated and will last a long time. They're available for around $12 per set.

Gibson Brite Wires make the grade on lists of the top guitar strings as compiled by Top Ten Select and eBay. These nickel-plated strings work well with any genre and deliver a clear tone with resonant sustain. Gibson Brite Wires come standard with all new Les Paul models, and for good reason. In his review of these strings, David Boles writes that they're a cinch to bend and that their sound "punches through the air." Gibson Brite Wires are recommended by Motorhead guitarist Phil Campbell. They're a great value, too, since you can get three sets of these strings for only $14.

When it comes to stringing your guitar, you've got a wealth of options at your fingertips. While all electric guitar strings are made of metal, they vary with regard to type. You will also find a wide range of gauges or thicknesses. Finally, strings differ in how they are wound. All of these considerations will affect your guitar's sound and playability, so you need to examine each factor and decide which is right for you, your instrument, and your style. 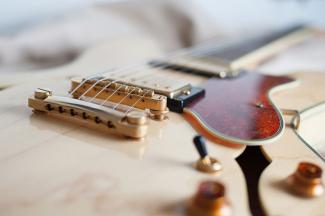 Most strings for electric guitars use one of three basic metals at their core: stainless steel, nickel-plated steel, or pure nickel. Some strings use chrome, copper, or titanium, but these are much less common. Each type of string presents its own unique characteristics and benefits. Which type is the best? It depends on the sound you want.

When you talk about the gauge of a string, you're referring to its diameter or its thickness. Different gauges will put different levels of tension on the neck of your guitar, and gauge also impacts the sound and playability of your instrument. To decide which gauge is best, you must take into account a number of factors that pertain to your skill level, your playing style, and your guitar. 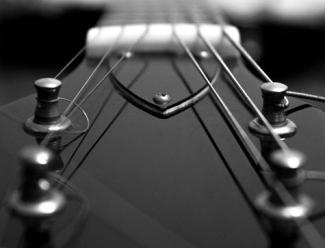 Strings are available as roundwound, flatwound, and half round types. Each type has different physical characteristics that result in various consequences for sound and playability. Again, which type you choose depends entirely on your personal preferences.

Some strings have a coating, a polymer covering that protects them against any number of elements that can shorten their life, whether sweat, dirt, body oils, corrosion, and oxidation. Coated strings often cost considerably more than non-coated strings. While you might have to pay twice the price, coated strings can offer great benefits with regard to durability and a great, fresh sound for a longer period of time, which you'll appreciate if you hate to change strings.

What's Best for You

The most effective way to discover which strings are best for you and your electric guitar is to experiment with different types. Indeed, recommendations for high-quality strings are a great place to start, but your next step is to try some of them out. Guitarists vary as much as guitars, playing styles, and musical genres, so while no one set of strings can be best for everybody, you will doubtlessly be able to find a set that's just right for you.