The sound and tone that comes from a guitar is affected by numerous stimuli in the signal path from your fingers, to the strings, to the wood, or through the cables and effects pedals into the amplifier. The very first step in this process involves your choice of guitar pick, and the importance of this choice is all too often overlooked.

Guitar picks come in a wide variety of styles, designs, and materials. While you should try different picks to discover which one suits you best, the following picks are always excellent, high-quality choices. 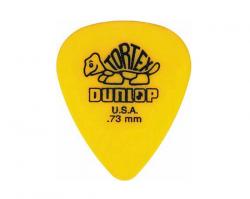 For many years, there was a general agreement amongst guitarists that tortoiseshell was the best material for guitar picks. When real tortoiseshell was outlawed in the early 1970s, manufacturers began experimenting with plastics to copy its famous texture and tone. Enter Delrin, the plastic material utilized in Dunlop's Tortex picks.

Tortex picks have a sort of powdery texture, which enables superior gripping from the guitarist and also creates a crisp friction on the strings. These picks receive glowing reviews from musicians of all styles, due to their versatility. They come in virtually all sizes, from the slim-line 0.50mm to the ultra-thick 1.14mm, and can be purchased from basically any music retailer. Amazon offers a 72 pack for under $15. 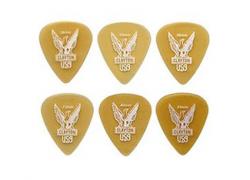 Ultem is another new-age plastic used in pick manufacturing that emulates the classic tortoiseshell sound but adds superior strength over the original material. Steve Clayton's ultem pick is known for the crisp, clean tones it produces and receives warm reviews from its customers. 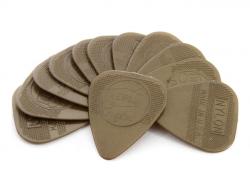 Dunlop nylon picks offer players a brighter, more vintage tone than standard plastic picks and also feature a textured grip area to negate that pesky slipping. The real advantage lies in their sturdy flexibility, which allows a player to go with a thinner pick without worrying about it breaking halfway through a song. Thicker gauged nylon picks also offer increased flexibility over their more rigid plastic counterparts, imparting a more sensitive feel in the guitarist's hands.

Dunlop offers various sub-models of their nylon picks, including the Herco, which has a rich history and was the choice of such legends as Led Zeppelin guitarist Jimmy Page. You can find 12-packs of these top-rated guitar picks at Sweetwater.com for around $4.00. 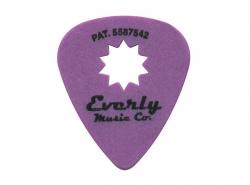 According to Everly itself, the beauty of the star grip pick is in its simplicity. There's nothing particularly special about the the star grip, besides the characteristic star punched out of the middle to add grip strength. Fortunately for Everly, that one modification has vaulted the pick into the ranks of the most popular and well liked.

You can find the Everly star grip pick at Musician's Friend online in 12-packs starting at $3.00.

TiSurvival is a custom shop that offers all sorts of special titanium products, including guitar picks. The creation of picks from stone or metal is no new phenomenon. Other metals, such as chrome or brass, can produce clean and bright tones but can unfortunately tend towards harshness. Metal picks can also cause damage to the guitar itself.

TiSurvival's titanium picks, on the other hand, produce a subtle, warm brightness. The pick is rated highly by its users for its familiar feel. These titanium picks are available for purchase for around $30 each on TiSurvival's website.

The Process of Choosing

A musician who is in the market for guitar picks should always start at a local music store. No amount of reviews or videos can replace the feeling of a pick in your own hands. A pick that fits your style, doesn't slip, and is durable will generally do the trick. Some other selection criteria to be aware of include the following:

There is no right or wrong answer to the question of which guitar pick to choose. Ultimately, your own preferences will be the deciding factor. Moreover, there is no reason to choose one guitar pick that you like and never try another one. These are relatively inexpensive pieces of gear. Branch out, experiment, and enjoy the plethora of tones that can be achieved from these little gems.