While the main function of the bass is to outline the harmony of pianists, guitarists, singers, or an orchestra or big band, the bass guitar can also be used as a harmonic instrument to play chords. The following chord chart is a great start for bassists learning how to use the bass as a chord instrument to accompany others or to use chords in a bass solo.

The following printable contains the chord chart. To print, click on the image. If you need help, consult this Guide To Adobe Printables. 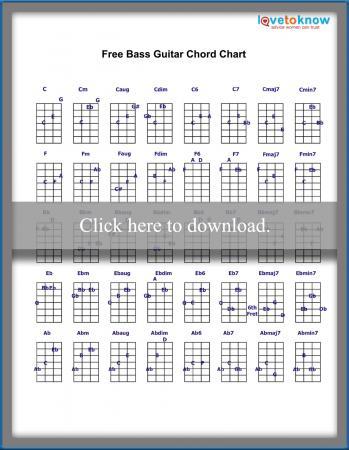 There are four triads in music: the major, minor, augmented, and diminished. Major and minor chords are "home base" type chords and can be the key a piece of music is in, while the augmented and diminished chords are "vehicle" type chords that are used to go somewhere, most often to a major or minor chord. The following ideas will help you get the most out of the chart and offer ideas on how to put the chords to use in a variety of musical situations.

The Seventh Chord and Beyond

A seventh chord is also mostly a "vehicle" type chord that brings you "home," except in the genres of jazz, blues, rhythm and blues, and funk, where a seventh chord may be a "home base" type chord. Major and minor seventh chords are most often used in jazz, standard songs, and Broadway show tunes.

In certain registers of the bass playing, the full triad or seventh chord may sound too dark or muddy where the notes lose clarity. Experiment with playing bass guitar chords with only the "chord defining intervals." For triads only play the root and third. For example in the key of C, play only C and E. For seventh chords, play only the third and seventh so that on a C7 chord, you play E and Bb. Due to the nature of the bass and the low sound of the strings, many of the chords on the chart will also sound great played up an octave, or twelve frets on the bass. Experiment with playing these chords in different registers and use your ear. The last part of the chart contains some blank bass diagrams for your notes and ideas.