The Gibson brand adorns some of the most recognizable guitars in the world. From the soul-searing sounds of a Les Paul heard through a Marshall stack in a rock club to the soothing melodies of a Hummingbird acoustic strummed in a café, Gibson models provide numerous colors in the rainbow of guitar sounds. Whether you're a country crooner or a hard rocker, there's a Gibson that's right for you.

In 1894, Orville Gibson was making instruments. His initial interest was in making mandolins and his company, formed in 1902, was originally called the Gibson Mandolin-Guitar Manufacturing Company. Gibson dominated the mandolin market through World War I, after which the market began to suffer. Shifting its focus to guitars in the early 1920s, Gibson spearheaded two innovations that endure to the present time: the height-adjustable bridge and the adjustable truss rod, both invented by Ted McHugh, a company employee.

Guitar Developments Over the Decades

Today, the company is known as Gibson Brands, Inc., having changed its name in 2013 from Gibson Guitar Corporation. Throughout the decades of its operation, the company has never ceased innovating and developing quality instruments for all kinds of guitarists.

Faced with the shrinking of the mandolin market, an acoustic engineer with Gibson, Lloyd Loar, sought to develop the ultimate mandolin, which he dubbed the F-5. He designed the L-5 guitar as its companion. Both instruments earned critical acclaim, but even the F-5 couldn't ratchet back up the demand for mandolins. The L-5, an acoustic guitar, helped save Gibson from bankruptcy by offering two major innovations: f-holes and an archtop, which were both inspired by the unique construction of violins.

In 1936, Gibson produced the ES-150, its first electric archtop guitar. ES stands for "Electric Spanish," differentiating these instruments from the company's electric Hawaiian lap steel guitars, which were dubbed EH. To provide more volume, Gibson developed larger acoustic guitars, such as the Super 400, the Advanced L-5, and the Super Jumbo. These guitars were embraced by country guitarists. In 1939, Gibson took the guitar world by storm by developing a cutaway body style for the L-5 Premier and Super 400 models. The new style gave guitarists freer access to the upper frets.

Before the outbreak of World War II, Gibson came out with the Southerner Jumbo and the J-45, two large flat top models. Production largely ceased during the war, except for 25,000 instruments made by a workforce of 70 women at Gibson's plant in Kalamazoo, Michigan from 1942 to 1945. Guitars made by the "Kalamazoo Gals" featured a banner on their tops which read "Only Gibson is Good Enough." These guitars are said to be exceptional in their beauty and sound quality, with some of them worth nearly $30,000 today. 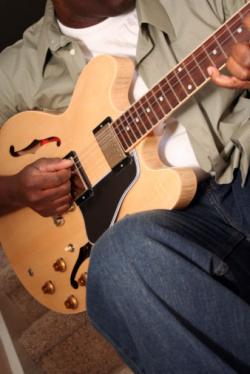 In 1952, Gibson produced its signature instrument, the Les Paul solid-body guitar. Ted McCarty, who was in charge of the company, wanted Gibson to stay competitive in the electric guitar market after the success of Fender's Telecaster. He approached famous guitarist Les Paul to design the new model. Other solid-body models like the SG, the Explorer, and the Flying V followed. New developments included the Tune-O-Matic bridge with adjustable saddles, a humbucking pickup that featured a double-coil design, and the ES-335, the first electric guitar to have a semi-hollow body design.

In the 1960s, Gibson produced acoustic guitars that became as popular with the folk and country crowd as its electric guitars became with the rock crowd. The Hummingbird, introduced in 1960, had a square shouldered look that was similar to Martin's dreadnought style. In 1962, Gibson launched the Dove, another square-shouldered acoustic guitar whose sides and back were constructed of maple. The 1970s and 1980s saw Gibson re-issuing popular electric models like the F-SL and the Les Paul Heritage 80 and producing new guitars like the B. B. King and Chet Atkins models.

In the mid-1990s, Gibson produced replicas of vintage guitars, such as the 1959 and 1960 flametop Les Paul. Gibson celebrated the fiftieth anniversary of the Les Paul in 2002 by developing the Gibson Digital Guitar, the first digital guitar in the world. Gibson's technological innovations continued to snowball in 2007 with the world's first robotic guitar and in 2008 with the Dark Fire, a high-technology self-tuning guitar.

Over the years, Gibson has developed electric guitar models that have become truly legendary. Any guitarist who has played one of these instruments can attest they are a delight on all conceivable levels, and they fully deserve the lofty place they have earned in the world of music. 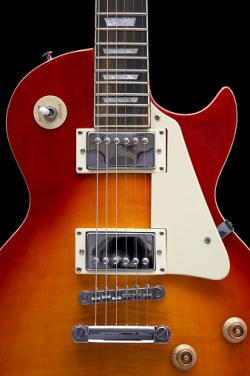 The Les Paul is the flagship guitar of the Gibson brand. Its curved maple top, sunburst finish, and mahogany back and sides make it visually stunning. The dual humbucker pickups controlled by two tone knobs, two volume knobs, and a three-way selector switch make the guitar a dream to play. This is the solid-body guitar that started it all.

Originally called the Solid Guitar, the SG, as it's currently known, is one of the most distinctive electric guitars in the world. With one glance, you immediately envision Angus Young prancing across the stage in his schoolboy uniform, cranking out AC/DC's classic songs. With two '57 classic humbuckers, a mahogany body, and those unmistakable pointed horns, the SG might have evolved from the original Les Paul but has since taken on a life of its own.

Though the Explorer was released in the 1950s, its unique body shape proved to be ahead of its time. It wasn't until the 1970s, when rock bands like Lynyrd Skynyrd and Def Leppard began to play Explorers on tour, that this model carved out its own niche. These beautiful guitars feature high-output humbucker pickups, mahogany bodies, and plenty of attitude. Explorers are still one of the most rock-n-roll guitars available on the market.

Of all the striking Gibson designs over the years, no guitar has been as stunningly original as the Flying V. In 1970, Jimi Hendrix left his trusty Strat behind and played a Flying V at the Isle of Wight festival in England. The dual fins on this guitar resemble the fins on the back of a 1957 Chevy. Big, heavy, unwieldy, and totally cool, this guitar takes you back to an era when sound and style were more important than practicality.

Gibson offers outstanding acoustic models that sound every bit as good as they look. These guitars continue the company's considerable track record for creating high-quality instruments any musician would be proud to own.

The Hummingbird acoustic guitar has been a standard since its birth in 1960. It's a beautiful guitar with its Sitka spruce top, mahogany back and sides, and a beautiful sunburst finish. However, the most distinctive feature of this guitar is the pickguard. The same natural scene of flowers, butterflies, and a hummingbird has graced the pickguard for over 40 years. It's like a little slice of the summer of love that you can take along wherever you and your guitar go.

Since 1962, the Dove has been a major player in the acoustic music scene. The guitar has a sound board made of solid Sitka spruce and is completely constructed of solid woods. Its lovely, distinctive tone complements heartfelt vocals. The pickguard depicts a pearl white dove sitting among beautifully colored red flowers and emerald green stems. With its longer scale, the Dove is a higher-end guitar than the Hummingbird. The solid maple sides make it a louder instrument, as well.

The J-200 has been around since 1937 and has been played by an impressive roster of accomplished artists including George Harrison, Jimmy Page, Neil Young, Elvis Presley, and John Lennon. Known as the King of the Flattops, the J-200 was a staple of the singing cowboy era with such stars as Roy Rogers and Gene Autry, and it remains a legend to this day. Like the Dove, the J-200 has a Sitka spruce top and solid maple back and sides. The J-200 looks fabulous with its tortoise pickguard and mustache bridge, and today's models come equipped with built-in electronics that let you set the sonic mood for your playing.

The J-45 has a truly vintage Gibson guitar feel. Every detail, from its vintage sunburst finish to its rounded shoulders, says "classic." This guitar originally debuted in the 1940s but has been played by guitarists of all styles since then. Affectionately known as the Workhorse by appreciative guitarists, the J-45 is suitable for both flatpicking and fingerpicking. It boasts a rich, resonant tone that has made it the guitar of choice for talented musicians, such as Woodie Guthrie and Buddy Holly.

Quite a few famous musicians have chosen Gibsons for playing, performing, and recording music. These amazing guitarists have helped to make their favorite guitars equally legendary in the annals of music history.

If you're a guitarist who hasn't heard of Charlie Christian, then you definitely need to learn about him. He was a famous jazz guitarist who is widely considered the first soloist on electric guitar. Before Charlie came along and changed everything, the guitar was widely regarded as more suitable for rhythm than for lead. From 1939 to 1942, Charlie Christian played with Benny Goodman, the famous bandleader, and pioneered an intricate means of soloing that used scales instead of the simpler, choppy chording style that was popular at the time. His favorite instrument was the Gibson ES-150.

B. B. King, the blues great, owned numerous Gibsons throughout his career, all of which he named Lucille. The first Lucille was a lower-end L-30 model that he whisked out of a burning nightclub. Over the years, he owned an ES-5, an ES-125, an ES-175, and an ES-355. His most beloved Lucille was a custom model based on the ES-355 which he co-designed with Gibson. Its main modification was the removal of the f-holes to lessen feedback.

Chet Atkins, a guitarist whose musical genius crossed genre lines from country to folk to jazz to classical, worked with Gibson to create beautiful custom electro-acoustic guitars, many with nylon strings. These guitars, well-suited to fingerpickers, included the Chet Atkins CE and the Chet Atkins CEC. The CE was a chambered guitar whereas the CEC didn't have a sound hole. The Chet Atkins SST was a solid-body acoustic guitar with steel strings. None of these guitars are produced today, but many are available as used guitars, and they command high prices. 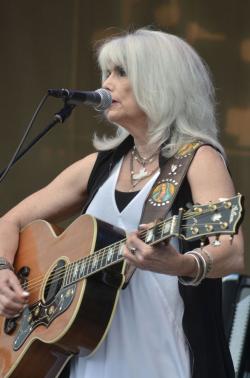 Emmylou Harris, a Grammy Award-winning singer and songwriter, has enjoyed a stellar, trailblazing career in country music for four decades. In an interview published in Acoustic Magazine, she states that the key to her songwriting is her guitar, which allows her to discover the heart of any song she's composing. Her favorite guitar, which she calls a "thing of beauty," is a Gibson SJ-200.

A Legacy of Quality

Gibson offers a tremendous selection of quality guitars for all styles of music. If you're interested in acquiring one of these fine instruments, do your research and get the model that will work for you. Gibson has set a high bar for superb craftsmanship of guitars for well over a century, and the company will undoubtedly continue its tradition of quality for generations to come.