One of the top ten most recorded songs in history, The Girl From Ipanema is a wonderful Bossa Nova classic and but one of the many, many great songs by Brazilian maestro Antonio Carlos Jobim. From a guitarist's standpoint, this cool, seductive song offers a chance to learn a wonderful South American rhythm and a terrific chord progression. The lyric explores the universal feeling of sadness and longing for someone who doesn't even notice you.

This Unique Chord Progression and Structure

The form of the song is A-A-B-A; in other words, the main theme repeats once, there is a bridge or middle section with a different melody and chords, and then the song returns to letter A. This is a common song form that is hundreds of years old and was used often in the great standard songs of Broadway shows. It is still popular today.

The printable version of the chord progression below shows the harmonic sophistication Jobim employed and the advanced "color" chords he uses to harmonize his haunting and instantly memorable melodies. If you are an intermediate guitarist or even just getting started, the chords here including the major 7, the 13, the minor 7, minor 9, and 9 chords will be a great addition to your chord repertoire. For help with printing this chord chart check out our Guide To Adobe Printables. 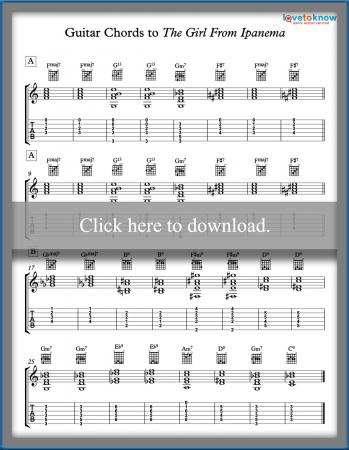 The official sheet music version for The Girl From Ipanema, with the melody in standard notation, the chord symbols, and the lyrics can be purchased at Musicnotes.com. One of the terrific features of this website is that there are versions for guitar and piano, as well as simplified versions for easy piano and big note piano and other instruments like the alto sax and clarinet. You can also buy the song and get the music as a digital download and have it to play immediately. If you like this song and are unfamiliar with the rest of Jobim's hit songs, there are some outstanding collections available on Amazon including an anthology, a definitive collection and a terrific book that explores solo guitar versions of Jobim songs along with two of his contemporaries, Luis Bonfa and Baden Powell.

Listen to the Classic

One of the best ways to understand this song is by listening to it played on guitar. This guitarist uses chords and a Bossa Nova beat with the melody, as well.

Latin music in general is based on many complex and sophisticated rhythms. The lilting, cool, and timelessly hip rhythm of the Bossa Nova can be challenging at first, but once you have it, you'll always remember it. The term Bossa Nova actually means "new trend" or "new thing" in Portuguese, and the Bossa's roots go back to the 1950's. It is based on the Samba, and a simplified way of explaining the Bossa Nova is that it is the slow version of Samba. A simple guitar technique to play this is the thumb plays the root of the chord on the first beat, the "and" of beat two and beat three and the first, second and third fingers pluck the rest of the chord on beat two and the and of beat three and four as is illustrated in the above graphic.

What The Bossa Nova Can Do For You

The Bossa Nova, and Brazilian music in general is a wonderful part of guitar history. The guitar has always been a focal point of the music and whether it's the cool, lilting, gentle beat of the Bossa or the upbeat, daring groove of the Samba, this beautiful and passionate style of music is a great addition to any guitarists language and the subtle and advanced harmony is a great window into some really terrific chord progressions and voicings. Incorporate what you've learned from this style into your own playing and writing as soon as possible and see what you can create.