Guitars made by Greco have attracted a devoted following of both professional and amateur guitar players for decades. Mostly known as one of the first clone guitar companies, Greco was a Japanese company that produced replicas of popular American guitars at a lower cost. These replicas became so high in quality that in some instances, they became more respected than the originals.

The Greco guitar story starts in 1948 in Japan.

Some of the most valuable guitars to collect are Greco's Super Real models, the Mint Collection series with the open "O" logo, and the Gibson and Fender duplicates because these models are no longer made. The following descriptions and videos provide details about Greco's most popular guitars.

The Mint Collection Series produced some of Greco's finest sounding guitars, and rarest. Its Les Paul duplicates look identical to Gibson's classic guitars, with the same warm humbucker sound and iconic sunburst. The telltale sign of a valuable Mint Collection guitar is the open "O" in the Greco logo at the top of the guitar.

This slimline archtop is another example of Greco's incredible craftsmanship. It has a figured top, back and sides, mother-of-pearl and abalone fret inlays, and a real tortoise shell binding. The bone nut, rosewood fingerboard, and Grover tuners combine with the rest of this guitar's feature to create a stunning instrument inside and out.

The Greco Strat duplicates captured the sound and look of the famous Fender original that it eventually earned Greco a lawsuit from the American guitar company. Its careful cut, just like a Fender's shape, and its slim body design demonstrated Greco's commitment to Fender's legendary products.

The Shrike is one of Greco's original models, and it certainly turned heads with its bizarre design: boomerang-shaped pickups that look like something from a sci-fi movie. Some of the arch-top, hollow bodies of the Shrike models were truly beautiful and when combined with the unique pickups, produced one of Japan's finest and most original contributions to guitars.

Not All Grecos Are Born Equal

While many of the high-end rare guitars from Greco have truly phenomenal designs, not every Greco ever made has possessed the same quality. As guitar collectors have noted in forums, occasionally--not very often, mind you--you will come across a Greco that is not high-quality. For this reason, even though Greco has an overall good reputation, it pays to ask the seller questions before buying.

The following stores are some of the best places to locate quality Grecos--even the rarest models.

Reverb might win the prize for the best place to buy a Greco online, simply because of its large selection; as many as 200-300 guitars by Greco are sometimes available to peruse. Because of its large selection, you will find Grecos beginning around $400 all the way to several thousand for rare models. You will also likely find every major model and era of Greco guitar, ranging from good to excellent condition.

While this store does not have a huge selection of Grecos, Guitar Center is consistently stocked with at least a handful of Grecos at any given time. Sometimes you can find them as cheap as around $500, and from there they go up to multiple thousands if it is an ultra-rare guitar. You will also usually find a good range of models from every decade that Greco's guitars were made.

BuyCheapr is an aggregate site that compiles links to ebay and Amazon and places them all in one place. For this reason, it is a convenient way to browse ebay and Amazon quickly without having to scroll through those sites separately. The site's user experience can be a little frustrating, however, because it mixes other products--guitar accessories and other guitars--in with its Greco results, so you have to look carefully through each page to pick out the guitars by Greco.

There are some clear negatives about Japan Vintage Guitar. It has a very small inventory, and it does not publish the prices of its guitars. You must contact them if you're interested in a guitar to find out the price. (Or perhaps they want to haggle.) Regardless, if you're desperately looking for an ultra-rare Greco, it's worth stopping this site because it's dedicated solely to Japanese vintage guitars. It just might have the diamond in the rough that you want.

Similar to Japan Vintage Guitars, Joe's site does not have a large selection. However, it does specialize in very rare models. It is more transparent about prices than Japan Vintage, and its biggest strength is it publishes detailed descriptions of the guitars so you come away well-informed about any product that interests you. 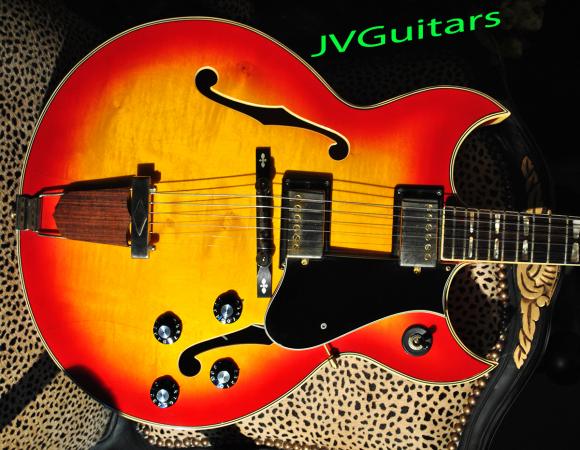 Make Sure It's Not a Forged Vintage Guitar

A crucial tip for any newcomer to vintage guitar shopping: always contact the owner of the site or the guitar and ask questions. In preparation for asking those questions, do your homework about what parts real vintage guitars should have.

Many vintage guitars are mixed bags. Some parts of the guitar are original, some are not. Some people even make forgeries of alleged vintage guitars. When you mine the forums where veteran guitar collectors chat around the watercooler, vintage guitar forgeries are always a hot topic because it is a common problem.

If you don't know where to start in researching authentic vintage guitars, read Gruhn's Guide To Vintage Guitars Updated and Revised Third Edition to educate yourself.

One of Japan's Finest Musical Legacies

The Greco guitar is another example that America, though a remarkable trendsetter in the twentieth century, doesn't have a monopoly on the stories that have shaped modern music. Japan has had its own legacy, and the Greco guitar has been one of its finest.