Country songs can be addictive because their chords and melodies are often simple yet beautifully written. Explore these song resources to master the guitar chords for your favorite country songs.

The three original LoveToKnow song sheets below contain guitar chords for popular country songs, and their simple structures will give you a quick start to learning. See Guide for Adobe Printables for help with downloading the file if you have any difficulty. 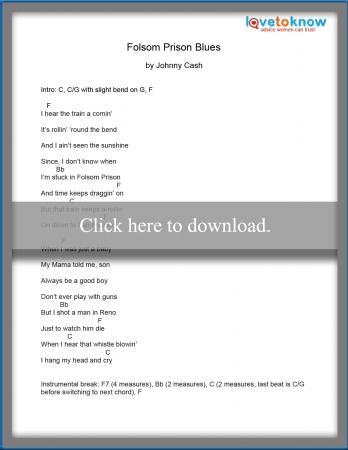 The Dance by Garth Brooks

Another legendary song that has transcended the country genre and become a modern music classic, The Dance, written by Tony Arata and discovered by Brooks in a serendipitous chain of events, helped catapult Garth Brooks to super-stardom in 1990 when it became his second number 1 hit on the charts. 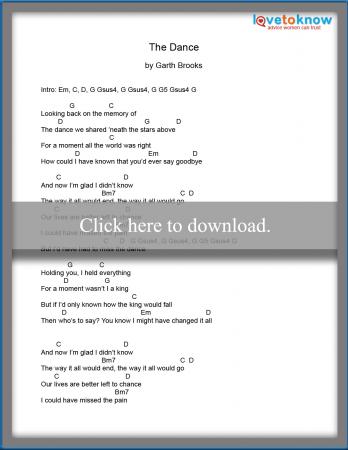 Every Little Thing by Carly Pearce

Every Little Thing by Carly Peace, a 2017 Top 20 Billboard hit, adds some of today's country flavor to the mix. The haunting chord progression that tastefully switches between major and minor chords combined with a well-written, bittersweet melody makes this song a wonderful addition to your guitar chord repertoire. 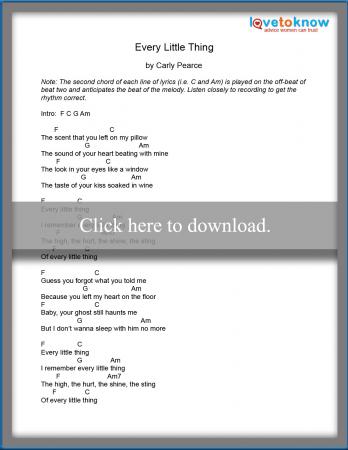 Country music often utilizes few chords in songs in order to emphasize other elements, such as lyrics, emotion, and performance. Many country music buffs will tell you it is about reality and emoting something relevant to your audience and less about chord progression. Popular country music chords include:

You can learn how to play each of these chords using LTK's free printable guitar chord chart.

It is rare to find a large variety of different chord types in a country song. For that reason, don't worry if you can't play fast, complicated chord changes. You likely won't need to.

Once you've mastered the three songs above, you can try your hand at these additional songs and browse other internet resources for more country songs:

Country Music on the Guitar

The rustic, simple sound of a bunch of strings rattling a hollow piece of wood somehow fits the country music genre perfectly. For this reason, learning to play country music on the guitar can be one of the most gratifying musical experiences you'll have because it doesn't take much to make a song sound amazing.