Music is a language, and the alphabet musicians use consists of 12 notes - A B C D E F G and the sharps and/or flats A#/Bb, C#/Db, D#/Eb, F#/Gb and G#/Ab between them. The easiest way to visualize these 12 notes is to think of a piano keyboard and the seven white keys and five black keys. Those same 12 notes exist in the six strings and in various locations on the fret board of the guitar. Learning this language, seeing where the notes are, how the system of the guitar works, and the how and why of playing them will help the beginning guitarist participate in the wonderful world of music.

There are basically two types of notes on the guitar. Open string notes, which are played by simply strumming any string on the guitar without holding down or "fretting" a note on that string, and the notes produced by holding down a note anywhere on the fret board. The open strings of the guitar in standard tuning are from low to high E A D G B E. The low E, the lowest note of the guitar is the one closest to the guitarist's body.

Where to Go From Here

The best practice for fretting notes is to place your fretting finger directly behind the fret, not on top of it or too far behind it to always ensure the note rings out clear and true. Each note in the musical alphabet exists on each string as the following chart illustrates. The notes simply move up one step at a time on any given string. In standard tuning the notes on the low E string start on open E and proceed up through the scale accordingly, the notes on the fifth string start on A and proceed up through the scale accordingly, and so on through each string. Some ways to think of and use this chart include:

Getting Better All the Time

Serious study of the notes in this manner will go a very long way towards understanding the guitar and what it will require of the beginner towards mastering it.

Guitarists from Big Bill Broonzy and Keith Richards to Neil Young and Joni Mitchell have explored new sounds by simply tuning a string or strings differently than the standard tuning of E A D G B E and have used these alternate tunings to great success. Jimi Hendrix, Stevie Ray Vaughn, and Toni Iommi were known to tune the entire guitar down a half step or more to get a different feel or heavier sound. One very popular alternate tuning is drop D, which is from low to high D A D G B E. Robbie Krieger of the Doors used this tuning to great effect on The End. In Drop D, the low D string produces E at the second fret, F at the third fret and so on. This will apply to every string in every alternate tuning. For each alternate tuning used, consider which fretted notes change and why.

Other popular alternate tunings for experimentation include:

The following chart shows the notes as they appear in these four alternate tunings. If you have trouble downloading it, check out this Guide for Adobe Printables. 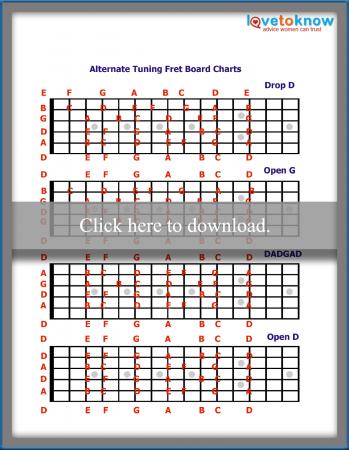 Here are a few proven methods for learning and memorizing the notes on the guitar:

Music is an intellectual endeavor and also a visceral activity. At its best, it appeals to both sides of human nature. When the beginner guitarist approaches learning with that in mind, that there is valuable information to process and learn, and that it will take some time to be able to convey that knowledge to a listener through the hands, success is imminent. Learning the notes on the guitar and being able to make music with them is but one step in the process.
2
Comments
© 2006-2020 LoveToKnow, Corp., except where otherwise noted. All Rights Reserved.
Resources, Advice & Tips for Covid-19
Read More
Guitar String Notes