If you're passionate about the look, feel, and playability of classical guitars, you might be interested in learning about the cream of the crop of these exquisite instruments. Whether you play classical, jazz, or flamenco, you are likely to find the instrument of your dreams when you explore the realm of high end, nylon string guitars.

The definition of a high end nylon string guitar includes numerous factors, each of which is vital. These factors must work with one another in a balanced way to result in an upscale instrument that any musician would be proud to call her dream guitar.

Top quality classical guitars are individually handcrafted by highly skilled luthiers. In the hands of master luthiers, no shortcuts are taken in body construction, fret placement, or components like tuners, saddles, and nuts. All components are of the highest quality. Expert luthiers invest time in making sure everything is put together to best advantage for superior tone, durability, playability, and responsiveness.

The best classical guitars use only the highest quality solid tonewoods for the sides, back, top, neck, and fingerboard. You won't find laminates used in high end instruments. Laminates are a means of making mass-produced guitars more affordable, but skilled luthiers know it takes solid woods. such as rosewood, mahogany, and spruce, for an instrument to sound its best.

Because of the top notch tuners used in their construction, upscale classical guitars are known for their tremendous ability to stay in tune, whether open tuning or while a guitarist is fretting. Cheaper guitars might stay in tune with open strings, but they can sound less tuneful as a guitarist works her way up the fretboard. If you choose an upscale classical guitar, you can have confidence in its ability to stay finely tuned throughout, no matter where you're playing on the fretboard.

The consensus among classical guitarists seems to be that the warmer the tone, the better. If you choose a top quality classical guitar over a mass-produced model, you'll be rewarded with a rich, warm tone capable of great projection, nuanced intonation, a broad range of dynamics, and tremendous resonance.

A high end, nylon string guitar is, quite simply, a work of art. These exquisite instruments embody almost as much appeal for their incredible looks as for their sound and playability. Each handcrafted classical guitar is a one-of-a-kind instrument with a uniquely beautiful appearance.

Since upscale classical guitars are individually handcrafted by master luthiers, you won't be able to walk into your local music instrument store and pluck one off the rack. Top quality guitars are often sold online, though, and you might need to contact the individual luthier for information about available models or custom builds.

Michael Thames has been crafting classical guitars for over forty years from his shop in New Mexico. Over those decades, he has produced around 800 of these exquisite, one-of-a-kind instruments, and he continuously works to develop and refine his unique approach. 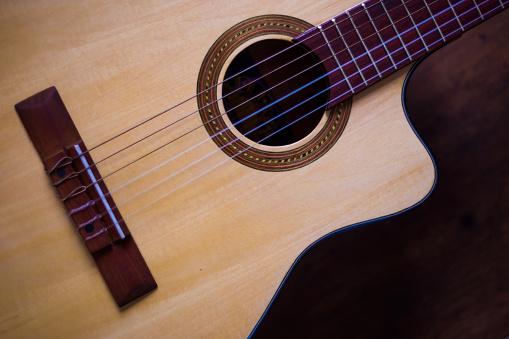 Douglass Scott is a Canadian luthier who crafts guitars that are nothing less than works of art. He focuses on building top quality concert instruments for classical, jazz, and flamenco artists. His guitars are prized by composers, collectors, and conservatory teachers and students. Contact Scott if you're interested in purchasing a guitar, or you can browse through currently available instruments.

Based in Downpatrick, Ireland, Lowden Guitars produces both nylon string and steel string instruments. George Lowden started making guitars in 1974, and over forty years later, he's still going strong as a luthier with a dedicated and highly skilled team. Lowden Guitars' handcrafted instruments are one-of-a-kind creations of uncompromising quality. You can sometimes find these guitars for sale online, or you can look for a dealer near you. 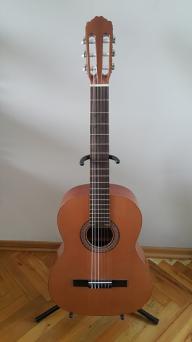 Master luthier Kenny Hill has been quoted as saying there are two kinds of guitars, one that people want to play and one that people don't want to play, and that he wants to build the kind people want to play. He has been doing exactly that since the 1970s: crafting top-notch instruments of exceptional playability. Kenny Hill distributes guitars through dealers across the United States, or if you wish, you can contact him directly about guitars in his showroom.

Based in the United Kingdom, Chris George has been making guitars for over forty years, many of them acoustic and electric, and he won the prestigious Guitarist's Choice award from Guitarist Magazine for his work. He also appeared on the shortlist for the MIA award for Best Acoustic Guitar of the Year in 2013. It turns out that Chris is skilled and innovative when it comes to making classical guitars, too. You can contact him directly for a custom build.

Founded by Bob Taylor over forty years ago, Taylor Guitars has become the number one acoustic guitar manufacturer in the United States. Taylor Guitars produces high end steel string and nylon string models that are played by famous artists, such as Jason Mraz and Taylor Swift.

Based in Oklahoma, Johnny Walker is a master luthier who constructs world class nylon string guitars in the classical and flamenco traditions. He got his start as a classical guitar student who built his own guitar, and he has been handcrafting guitars ever since. His instruments have an excellent, resonant tone with plenty of volume, harmonics, and sustain. Contact him directly if you're interested in a guitar. 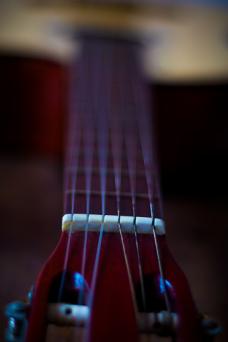 Cordoba Guitars has been around since 1997, and in the two decades of their existence, they have sought to develop and refine the classical guitar in the modern age. Cordoba draws on the Spanish heritage of the classical guitar and the skills of gifted luthiers to create beautiful and responsive instruments.

Paulino Bernabé Roman has continued in the tradition of his father, Paulino Bernabé Almendariz, crafting world famous Spanish classical guitars from his shop in Madrid. Paulino Bernabé II worked alongside his father for thirty years, learning the craft, and has remained true to his father's legacy. Paulo Bernabé guitars are internationally recognized as superb and are coveted by serious musicians all around the globe.

An Investment for a Lifetime

If you're interested in purchasing a high end classical guitar, you'll have to make a sizable financial investment, since these magnificent instruments don't come cheap. If you have the funds, though, to make such a purchase, you won't regret it, since a one-of-a-kind, masterfully crafted classical guitar, with its beauty, impeccable sound, and exceptional playability, will give you tremendous joy over the course of your lifetime.