One of the truly great compositions in classic rock history, the Eagles' Hotel California has all the requisite components of a masterpiece. It has poignant and timeless lyrics delivered by a typically great Don Henley vocal, outstanding guitar work by Joe Walsh and Don Felder, and an overall top shelf group performance. However, this piece of music, as so many do, started with a simple chord progression when guitarist Don Felder brought these awesome chord changes to the band and in true Eagles fashion, they worked their magic.

Hotel California uses a basic AAB type of song structure, so there are two sections of music: the A and B sections. The A section is the verses, and the B section is the chorus. The printable offers the music in standard notation, chord diagrams, and tablature so guitarists of all levels can enjoy the music. To print, click on the image. If you need help, consult this Guide for Adobe Printables. 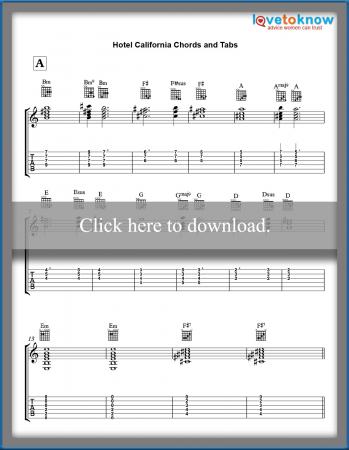 The beginning of this iconic number starts with the chord progression of the A section being arpeggiated over the bass line and as the piece continues, the band joins in a wonderfully subtle crescendo until the drums and vocals enter. These group dynamics add so much to the musicality of the performance. The minor and major ninth and sus chords add quite a bit to the overall sophistication of the tune. The good news is these advanced color chords are not only great to add to your musical pallette, but they also happen to be quite easy to finger.

The chorus is really a simple variation on the verse harmonically. There's less harmonic motion in the chorus and fewer chords, but all the chords that appear in the B section appear first in the A section. In the chorus, they are simply played in a different order. Regarding the structure of the song, this AAB format is the basis for the entire number. There's the intro, which is the A section played twice, the repetition of the verse, verse, chorus and the long, inspiring guitar solo that closes the number. The solo is played over the A section only.

Check Out Any Time but Never Leave

This song provides so much musical information it's a great resource for improving guitarists. For example, the first chord, B minor at the seventh fret, is a movable chord. In other words, you can play it anywhere on the guitar, and whatever note is on the fourth string is the root or name of the chord. The same rule applies to most of the chord shapes in this song. So if you didn't already, you now have major, minor, major 9, minor 9 and sus chords you can play in any key. Another point of interest is how the band takes a 32-bar chord progression and turns it into an absolute gem. With great songwriting skills and impeccable musicianship, they gave it a beginning, middle, and end, as any great story has. That is something to strive for!