At its simplest, slide guitar technique involves running a cylinder made from various materials over the guitar strings in order to produce a smooth sliding sound from one note to the next. The following steps will teach you how to play this special technique properly.

Start by Open Tuning the Guitar

Before you begin, try an open turning. While a standard guitar tuning (low to high E-A-D-G-B-E) could be used to play slide guitar, an open tuning such as the open G tuning makes it easier to play chords with the slide.

The following tips will help you get started with the slide.

1. Place the Slide on Your Pinky or Ring Finger 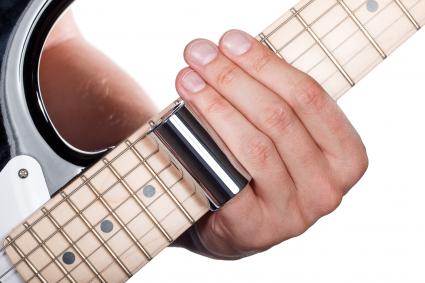 2. Press Gently on the Strings

As mentioned above, you are never supposed to press the strings all the way down to the fret board as you do when you play guitar without a slide. Imagine an ice skater gliding effortlessly across the surface of the ice and you have a good sense of how the slide works on strings. You're never pushing the slide hard on the string, but gently keeping it in consistent contact with the string as you glide.

When you first begin playing, your fingers will want to turn at an angle to the frets as you would when playing without a slide. But when you're using a slide, you must learn to keep your fingers perfectly parallel with the metal bars of the frets so that the slide lays across the strings in a straight line.

Another big difference with the slide: when you play guitar without a slide you are pressing your finger in between the fret's metal bars, but with the slide you are aiming to place your slide directly over the metal bar below the note you want to sound as this video shows.

What do your other fingers behind the slide do? They rest gently on the strings being played to mute them and keep them from vibrating. This provides a cleaner tone for the slide without other sections of the strings humming or buzzing behind it.

Playing Single Melody on One String

The following steps break down playing a single melody.

If you are playing a scale or single note melody on the high E string, for example, you would tilt the slide slightly upward at an angle so that the slide is only (or mostly) touching the string in question and keeping consistent contact with that string. To play a melody on a middle string or low string, you would lay the slide flat across the strings until the targeted string has direct contact with the slide.

2. Try Sliding Up Into Notes

As you play notes on the targeted string, you will generally slide up into the notes from below.

3. Try Falling Down Into Notes

This takes more practice, but once you slide up into a note, you can hold it, then gently slide down from where you started. This is a helpful exercise to help you master sliding up and down to targeted notes.

After you've mastered the basics of the steps above, you can try these intermediate techniques.

Don't Use a Pick With the Right Hand

Most slide players ditch the pick and learn the claw fingerpicking technique similar to what jazz and classical guitarists use. With this technique, your thumb plucks the lowest note of the chord while your index, middle and ring fingers form a claw to pluck the three highest notes of the chord as this video demonstrates.

You can follow the same steps above under "Playing Single Melody On One String," but you will be aiming to make contact two or more strings instead of one string. A useful way to start playing chords with a slide is to play bar chords. Your index finger plays the root of the chord while the slide plays the notes of the chord two frets higher (as the following video demonstrates).

Practice Patience for the Nuanced Art

With slide guitar, you are using the microtones in between standard guitar notes to create a beautiful effect. When doing anything that involves the word "micro," the practice will require a high level of precision. It may sound sloppy when you first begin, but if you're patient with yourself and give it time, your slide guitar will sound clear and controlled.