It's a great time to be a kid who wants to learn electric guitar. In today's market, almost every major guitar maker has taken the time to create high quality miniature replicas of their most famous guitar designs.

The Squier Mini Strat, rated a 4.9 out of 5 on Kid Guitarist and described as the most popular electric guitar for kids, is made by Fender, the same company who makes the famous Stratocasters. It is a bare-boned version of the legendary guitar, which makes it affordable at about $130 new just over $100 used on Amazon.

It includes the following features:

It's hard to go wrong with a Fender Stratocaster. The beauty about this miniature version is that when the child grows out of it, they can keep it as a quality travel guitar that offers a classic Strat electric sound on the road.

The Les Paul Special II, recommended by The Hub at Musician's Friend, is a replica of Gibson's iconic instrument, except at a smaller 24.75" scale. For around $210, you can purchase this guitar along with a starter kit that includes an amplifier, case, strap, pinch-on tuner, picks, and a cable.

The guitar includes the following features:

This guitar is of such high quality that, according to The Hub, adult players love taking it on the road as a workhorse guitar and leaving their more expensive Les Pauls at home.

This miniature Ibanez, the same smaller size scale as the Mini Strat and Les Paul, offers somewhat of a middle point between the two at a price of about $150. Another top-rated guitar on Kid Guitarist, rated 4.7 our of 5 stars, it is a replica of Ibanez's most well known axe, the RG.

Ibanez guitars definitely have a heavier sound to them when distortion is applied, which might be appropriate if your child plans to crank up the metal. But to some extent, this is also a generalization. The Ibanez also has a beautiful non-distorted clean sound that can make any genre sound gorgeous.

This guitar recreates the famous V-shaped electric guitar that many people have fixed in their minds when they think of a rock guitarist playing killer solos in a hard rock or metal band. Dean sells the guitar for $200.

If you love these Dean miniature guitars, the brand also sells the Baby ML and the Baby Z, modeled after other famous guitars with oddly cool shapes.

Made by the legendary battery powered mini-amplifier company Pignose, these guitars were originally designed for travelers, but they are great for younger guitarists ages 6 to 10 like the other miniature guitars on this list. 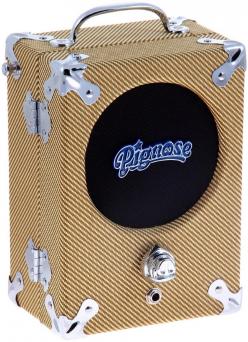 Note: It is on the higher end of miniature guitars, ranging from $330 to $400 on Ebay, but it has a built-in amp and luxury touches like gold hardware.

The guitar's features also include:

With a built-in amp, it will save you the hassle of shelling out extra dollars for a speaker system.

The Rogue Rocketeer, which is the lowest priced miniature guitar on this list at about $80, is rated 4.7 out of 5 stars on Guitar Center, and it is one of the stores top sellers.

Its smaller size, even smaller than most of the other miniature guitars, makes it a good choice for players on the younger end of the 6 to 10-year-old range.

As you explore the options for miniature guitars, keep in mind the following tips:

Let Your Child Help You Decide On the Right Guitar

It's easy for the parent to get excited about a certain guitar but if you want your child to stick with playing the instrument, make sure he or she is as excited about the particular model as you are. Involve them in the shopping process, and it will help motivate their commitment to playing it.