The sounds that emanate from a lap steel guitar have enchanted music lovers for more than 100 years. From Hawaiian cowboy folk songs all the way to the plaintive soul sounds of rock and roll, steel guitars add distinctive elements to nearly all music genres.

Get to Know the Lap Steel Guitar

In musical nomenclature, a steel guitar is both an instrument and a method of playing. At first glance most versions look like regular guitars, but subtleties in design and manufacture make the differences apparent. The steel guitar's most distinguishing feature is the height of its strings, which generally sit approximately half an inch higher off the fret board than traditional guitars and make the frets themselves unnecessary.

Like most inventions, the original concept spawned several versions of different lap guitars played with a slide. These versions include: 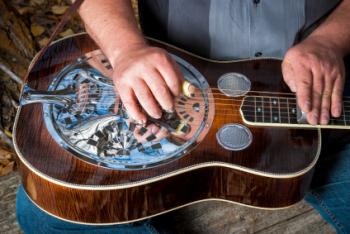 Based on its name alone, it's clear that musicians typically play lap steels by placing them across their laps. Over time, guitar design evolved to extend play from the confines of a lap to flat surfaces located in front of the musician, or to stand alone versions of the instrument.

Playing the lap steel is as simple as holding a slide against the strings with one hand while plucking with the other hand, yet it is as complicated as emotionally and instinctively knowing how to dance the slide across the strings in just the right way to hold an audience in thrall.

As far as nuance, coaxing the characteristic primal slurs and mournful blues from the instrument requires practice, experience and ever-evolving picking and sliding techniques.

The following manufacturers are producing brand new lap steel guitars that are a bit out of the norm.

There are so many vintage lap steels that it is difficult to make a list, but here are a few standards just to give you an idea.

The lap steel occupies an important place in the progression of guitar music despite the murkiness that surrounds its original inception. Created from a simple idea formed in the mid to late 1800s, the earliest steel guitar quickly became the model from which subsequent instruments emerged.

No evidence exists definitively proving who invented the lap steel, but it's widely accepted that Hawaiian musician Joseph Kekuku plucked a metal bolt from the ground and slid it across his guitar's strings when he was a child. Other theories credit Indian sailor Gabriel Davion, and Portuguese/Hawaiian James Hoa with inventing the instrument.

Throughout the early 20th century, using Hawaiian guitar techniques became increasingly popular in the United States. By 1930 major music publishers made this style of guitar methodology available to the public. Typically, lap steel, dobro and pedal steel guitars are linked to Hawaiian, country and bluegrass genres while resonator guitars appear most often in rock, blues and jazz. In spite of these associations, nearly all musical genres feature guitarists who occasionally indulge in lap and slide guitar playing.

The allure of the steel guitar has ensnared many well known guitarists from all walks of the music industry. With practice and passion, these players have fused their signature sounds with the unforgettable vibrato of the lap steel guitar, extending the reach of their music to people of all interests. 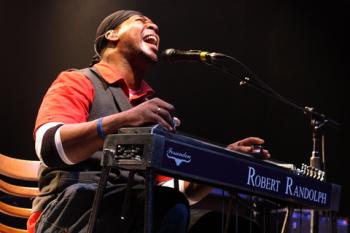 An Unusual Instrument with a Distinctive Sound

As unusual as a lap steel looks, compared to a standard guitar it's the sound of this instrument that truly sets it apart. Once you've heard the soulful yet melodic wail of a lap steel, you'll understand why this guitar has drawn such a following through the years.