Most burgeoning guitarists want to play dazzling solos and follow in the footsteps of their guitar heroes. Those heroes created their solos through an intimate knowledge of chords. Learning to play guitar chords properly requires a close familiarity of the fret board and the willingness to develop muscle memory through repetition. Before you begin practicing chords, there are three key components to keep in mind.

A common problem for many new guitarists is proper finger position. To produce excellent chord sounds, you will need to use the tips and not the pads of your fingers when pressing the strings. It is also important that you place your thumb on the back of the neck in the center so that it is out of sight, as the picture below demonstrates. If you do this, your thumb will act as a brace that will help your fingers apply more pressure to the strings. If you incorrectly allow your thumb to wrap around, you will lose strength in your fingers. More advanced guitarists, however, have such strong fingers that they can get away with poor thumb position.

This is the correct position for the thumb. It is not wrapping completely around the neck, therefore it is out of sight. Notice the fingers angled in such a way so that the tips are pressing on the strings: 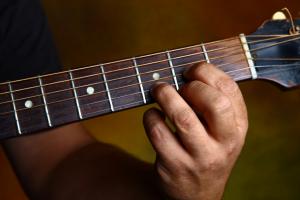 This is the incorrect position for the thumb because it is wrapping around the neck and is visible. The fingers, however, are correctly positioned with their tips against the strings: 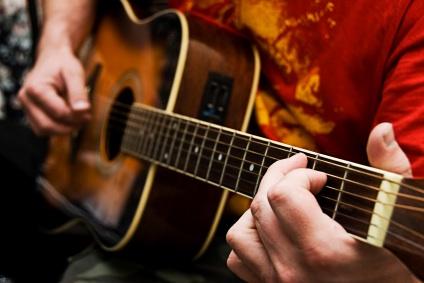 Do not put your fingers directly on the metal bars that line the neck of the guitar. This can cause either a tinny sound or a fuzzy sound. Instead, place each finger in the space between each metal bar. When a guitar teacher tells you to place your finger on the second fret, for example, she means the second space between the bars if you're counting from the top of the neck. For example, in the chord diagram for D at the right, two notes are on the second fret and one note is on the third fret.

To play the D Major chord shown in the previous diagram:

To play a G Major chord: 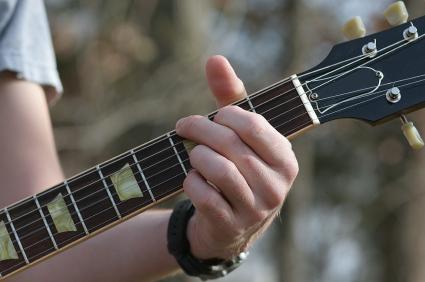 Although it may be boring, the best way to learn a chord is through repetition and experimentation. Press your fingers with different levels of pressure to see which makes the chord ring through. Take your fingers off the neck, then go back to the chord, increasing the speed with which you do this each time. Try repeating this drill for 10 to 20 minutes. When your fingers have developed strong muscle memory for that chord, move onto the next one.

The Necessity of Patience

It does not take long to find chord charts that show you finger placements for various chords. Finding the information is the easy part. The difficult part comes during the first month or so of practice when progress seems slow and painful for your fingers. If you press forward despite the frustration, you will eventually overcome that steep uphill battle that beginning guitarists face in the first few weeks of practice. The day will come when everything suddenly clicks, and your fingers, thanks to muscle memory, know exactly what to do with seamless precision. Getting to that point of triumph, however, requires patience.