Martin acoustic guitars are legendary for their aesthetics, quality, and sound, and they enjoy one of the most stellar reputations in the music industry. These internationally renowned guitars are sought after by musicians from all genres, including folk, blues, acoustic rock and roll, country, and classical.

Since 1833, Martin has been building guitars that are manufactured to the highest standards. The business has been family-owned for six generations. The current CEO of C. F. Martin & Company, Christian Frederick Martin IV, known as Chris, is a direct descendant of the company's founder.

Founder of the Company

The history of the Martin guitar company began with Christian Frederick Martin, Sr. who was born in Germany in 1796 into a family of cabinet makers. At fifteen years old, he developed an interest in crafting guitars, and he moved to Vienna to study with master luthier Johann Stauffer. After completing his period of apprenticeship, he moved back to Markneukirchen, his hometown, and started a shop of his own.

Move to the United States

A few years later, C. F. Martin relocated his shop in Nazareth, Pennsylvania, where it remains to this day. By 1859, the company was doing so well it expanded its operations to a factory. In 1964, as part of post World War II prosperity and a growing interest in folk and country music, demand for the guitars skyrocketed, so the company had to build a still bigger plant. Martin guitars have remained handcrafted throughout the course of their history.

Guitar Developments Over the Decades 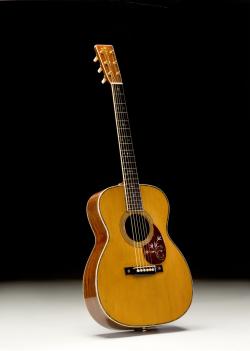 Martin built their first guitars in a small storefront shop. As the years went by and demand for these fine instruments increased, the company grew and developed. Along with that growth came multiple innovations with regard to guitar manufacturing and design.

In the 1850s, Martin came up with the X-bracing system for the top of a guitar, which serves as an instrument's framework and has implications for its tone. The X-bracing system is still used today on Martin steel string guitars that have handmade dovetail neck joints.

Martin developed a number of other bracing systems for various types of guitars. As the company grew, customers wanted a wider variety of options with regard to both durability and tone quality.

Due to the Great Depression that began in 1929, Martin needed to push the envelope with major innovations to keep their company in the black. The fourteen-fret neck was one of these innovations, and it revolutionized the guitar industry. 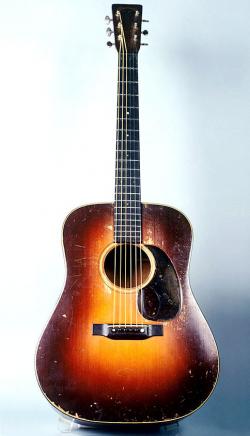 The introduction of the dreadnought guitar was another of Martin's groundbreaking moves in the wake of the Great Depression. Over the years, these guitars have become iconic, especially in country and western music.

Martin is mostly known for their flat-top guitars. Since archhtop guitars were popular in the 1920s, 30s, and 40s, though, Martin tried to get in on the trend, and as a result, they crafted a number of beautiful, great-sounding instruments.

Since Martin is famous for its outstanding acoustic guitars, many people don't know that they have had several forays into producing electric guitars, as well.

Chris Martin became CEO of the company in 1986. One of his many achievements has been the incorporation of computer-aided manufacturing processes to design high-end models such as the 000-17, as well as more affordable models such as the X Series guitars. 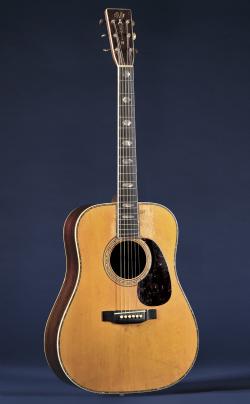 In your exploration of Martins, it will help you to be able to decipher the code by which the company designates their models. While it might look complex, it's actually quite simple. Generally, the model number for a standard line of guitars contains two parts separated by a hyphen, such as D-35 or 5-18. The first part refers to the size of the guitar, which is represented by either a letter or a number. The smaller the number, the larger the guitar. The latter part of the code refers to the tonewoods from which the line of guitars is constructed. Sometimes the first part of the code is a letter, such as D, which means "dreadnought."

Martin continues to craft numerous lines of guitars, all of which are exquisite in their tone, playability, and appearance. For generations, discerning musicians from many musical genres have coveted Martin acoustic guitars, and there are plenty of outstanding models from which to choose.

The D-28 is a phenomenally popular dreadnought guitar that was named by American Musical Supply as one of the best acoustic guitars for singer-songwriters. The D-28 was the guitar of choice for Joni Mitchell on her early tours and recordings and for Paul McCartney to record Blackbird for The White Album. The D-28 is built on an X-bracing framework and features East Indian rosewood for its sides and mahogany for its neck. The top of the guitar is made of Sitka spruce and the fingerboard is made of ebony. These woods ensure a sturdy guitar with a glossy finish that packs a punch with its clear and powerful sound.

Classical guitarists and musicians who prefer guitars that use nylon strings will want to check out the Martin 000C Nylon. The 000C is a single cutaway guitar equipped with an onboard analog pickup. The instrument is built on a hybrid X-bracing framework, and its top is made of solid Sitka spruce. The fingerboard, back, and sides are constructed from the HPLs Richlite and Sapele, both of which are environmentally friendly choices. Though the 000C is a nylon string guitar, its lower tension produces a unique sound and feel that will remind many guitarists of steel string models, so folk musicians will love this guitar, as well.

If you're in the market for a high-end acoustic guitar with a slimmer, lighter body that will be more comfortable to play, you'll want to look into the M-36. Martin also refers to the M class guitars as the Grand Auditorium style. These guitars are gorgeous instruments with their stunning bindings and inlays. Though it's a medium-sized guitar, the tone of the M-36 has outstanding projection, a ringing high end, and a resonant bass end. Musicians who play the M-36 praise the playability of the guitar, saying that it almost seems to become a part of their bodies. It features a top made of Sitka spruce and a back and sides made of East Indian rosewood.

Musicians who play with a fingerpicking style will enjoy the Martin GPCPA5, an acoustic-electric guitar that was selected by Song Simian as one of the four best guitars for fingerpickers. The GPCPA5, part of Martin's Performing Artist Series, is also a more affordable instrument. This single-cutaway guitar has a narrow waist and a deep body built on a hybrid X-bracing framework. Its top is made of solid Sitka spruce, and its back and sides are made of environmentally friendly rosewood HPL (high-pressure laminate). With its onboard preamp that has tone and volume controls, the GPCPA5 delivers a highly articulate and balanced tone.

If you're looking for a new Martin guitar with the appeal of vintage models, look no further than the OM-28E Retro. This high-end guitar is a modern-day recreation of the classic Orchestra Model that was introduced in 1930. Guitar World praises the OM-28E Retro, saying that out of all Martin's present-day versions of classic models, this guitar is the one that hearkens the most back to that luscious vintage sound that is so prized by serious musicians and collectors. The OM-28E Retro is a non-cutaway style instrument with a top made of solid Sitka spruce and back and sides made of East Indian rosewood. The guitar is also equipped with a Fishman F1 Aura Plus pickup system.

From the beginning, the guitars crafted by C. F. Martin & Co. have been built with care, from the heart, and with top quality always in mind. Over the six generations that have passed since its inception, the company has earned an unmatched reputation for building superb guitars that endure for generations, deliver outstanding and captivating tones, and win the hearts of the lucky guitarists who own them.