Ovation guitars are some of the most beautiful instruments on the planet and just one glimpse of the Ovation website will convince you of this. It's not hard to see why when you learn the unique back story of one of the most innovative companies in the guitar market.

In contrast to other guitar companies such as Fender and Gibson, Ovation is a relatively young company. It didn't appear on the scene until well after the guitar revolution had begun in popular music.

The Cultural Phenomenon of Ovation

Ovation's innovative design from the mind of an aeronautical engineer has attracted a fiercely devoted following of Ovation fans that has endured even afters its peak popularity in the 1980s. The guitar has its own fan club and hobbyist historians who have gone so far as cataloguing a history of the labels inside Ovation guitars.

Besides hobbyist musicians love the instrument, the following artists have used it at some point in their career, as another Ovation fan site notes:

Ovation has found such a following in popular culture that the writers of the hit TV show Lost included an Ovation guitar in its opening episodes when Dominic Monaghan's character Charlie Pace searches for his beloved guitar following the crash of the Oceanic 815 airliner--a clever writing decision, considering the guitar is made from aerospace-level composite materials.

Adamas models feature off-center and uniquely-shaped tear drop and bear claw-shaped sound holes near the neck and other features such as:

Some of the other Adamas guitar models include:

The classic Ovation model includes several celebrity signature series in its lineup. The Ovation guitar has the following unique features:

Some of the other Ovation guitar models include:

The new Applause line has the traditional beloved Ovation features as well as some new ones, and it features guitars that are in a lower cost range--some below about $500:

Some of the other Applause guitar models include:

The following stores are some of the best places to locate quality Ovation guitars.

Ovation's site doubles as an online guitar store, and it features prices and ordering options so that you can get your Ovation straight from its maker. For example, its new Collector's Series Legend Plus Sapele-style Ovation is listed for about $1,299. Its prices are the same prices you will find at other retailers selling new Ovations. It does not sell used versions at cheaper prices as online retailers do.

Sweetwater consistently has a nice variety of Ovation models such as the 50th Anniversary Folklore with as many as 48 pages of Ovation guitars at times. The prices are not much different than standard retail prices you'd find at Ovation's site or other guitar stores, but the site offers financing if you'd rather pay for the guitar gradually. 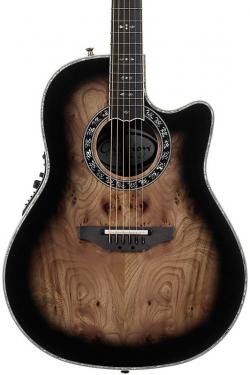 Guitar Center's selection of Ovation is fairly large--close to 200 Ovation guitars listed at times--and it offers used, cheaper Ovations in its "Used Gear" section. However it doesn't have used versions for every model. Although its inventory fluctuates and doesn't always have the used selection that Reverb has, if you're a loyal Guitar Center shopper, you will be pleased to know that the store at least offers a decent-sized selection of Ovation.

Another popular musical instrument retail site, Musician's Friend offers both used and new Ovations, but it doesn't have the high volume of Ovation selection as Reverb or Guitar Center, and their prices are close to the other sites. However, it's a good place to check if you haven't been able to find the model you're looking for elsewhere, and it has an excellent site design that allows you to see subcategories that show their Ovation inventory by price range, customer rating, type, condition and others.

The Ovation guitar is a classic made-in-America story that offers a refreshingly innovative approach to everything it does. If you're tired of the same old approach to guitars, Ovation will give you something different just as it has done for many of the best guitarists.