Paint It Black is a classic from one of the truly fertile periods in the Rolling Stones illustrious career. Many of their popular songs from this late 60's period featured a unique sound or instrument not often associated with rock or pop music, usually because Brian Jones had the ability to walk up to a flute, vibraphone, or in the case of Paint It Black a sitar and play it. The sitar is featured throughout this wonderfully dark and hard grooving classic.

When using tablature, remember it is a great short-cut to learning fun, popular music quickly. Click here for help downloading and printing this tablature. 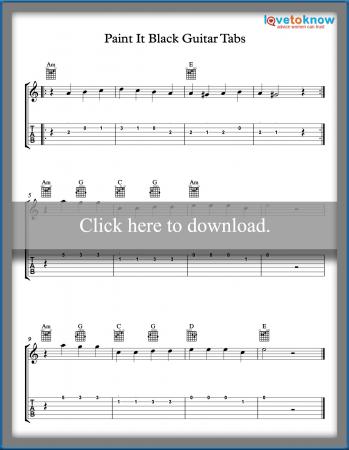 Other Sources For Paint It Black Tabs

There are many other sources for tabs for this song, as well.

At Music Notes, you can find the standard sheet music notation of the official version of the song. Music notes offers a number of affordable versions of the song for many instruments that can be easily and instantly downloaded. In addition to this option, if you would like to learn a number of the Rolling Stones early classics try the following books to expand your repertoire:

The History of Paint It Black

Paint It Black, released as a single in 1966, harkens back to the psychedelic sound that the Rolling Stones and other iconic '60s bands like The Beatles and The Doors explored during the years following the Summer of Love. The use of the sitar on Paint It Black is relevant for a few reasons. When The Beatles visited Transcendental Meditation guru Maharishi Mahesh Yogi in India, George Harrison learned how to play the sitar. When he returned to England, he taught the basics of the instrument to the Stones lead guitarist Brian Jones. Also during this period, jazz saxophonist John Coltrane became enamored with the sound of the great sitar virtuoso Ravi Shankar and that manifested itself in many of Coltrane's famous pieces of the time and his use of the soprano saxophone on his version of My Favorite Things, which influenced so many of the great 60's rock groups. Enjoy playing this wonderful Stones classic and keep listening to great music.