A truly beautiful piece of music, the Led Zeppelin masterpiece Stairway To Heaven is a must learn for all aspiring rock guitarists. The piece features an incredible use of harmony, band interplay, a wonderful vocal, tension and resolution, and the long crescendo that culminates with one of the all-time great rock guitar solos.

In Wayne's World, the joke is the sign in the guitar shop that says "No Stairway To Heaven." Ignore that because this song is a collection of chord progressions and riffs that, in and of themselves, could be songs. This tablature breaks the music down into sections for easy learning. Once learned, play with each section and see where it can take you creatively, as there is simply so much wonderful material here. For help with the following tablature refer to the easy-to-use guide to adobe printables. 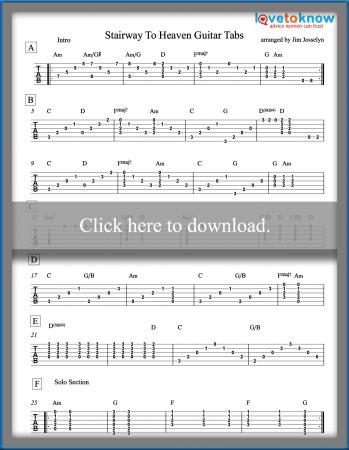 The introduction is actually based on a common chord progression that can be traced back to Duke Ellington's In A Sentimental Mood and the standard song My Funny Valentine, and most likely back further to the classical strains of genius composers like Bach and Beethoven. Play this section finger style and notice guitarist Jimmy Page's use of contrary motion where the melody goes up and the bass line or root notes of the chords go down.

As the song develops, Page uses his mastery of chords in the first position to expand on the harmony in the intro. The chord lick in measure eight with the Dsus to D to Dsus2 back to D is a common and often quoted chord cliche. Also of note is that this second section of the tune is the only eight bar phrase, as every other section is four bars long.

At about two minutes into the piece, letter C lets the listener know the song is really going places. The folk feel of the first two sections give way to this third part of the tune that gently rocks. Grab your pick for heavier strumming if you haven't already because at about four minutes in, the great John Bonham joins in on his drums.

This is a variation on letter B and works perfectly in between the repetitions of letter C that bring the song to its transition section of Letter E. The drums stop as the guitar leads the band on the section that brings the song to its conclusion at Letter F. The chord progression of Am - G - F in this section is a great place to work on improvisation. You can use the A blues scale - A-C-D-D#-E-G-A, the A minor pentatonic scale - A-C-D-E-G-A, and the A natural minor scale - A-B-C-D-E-F-G-A. Also listen to Page's famous solo and see what you can "borrow" from him.

Other Sources for Stairway to Heaven Tablature

The following sites offer versions of Stairway to Heaven tabs, as well. When using tablature online, remember that some transcribers are better than others. Use your ear and if it doesn't sound correct, it most likely isn't.

Study the compositional and songwriting aspects of this piece. Understand the use of dynamics and how and why the band orchestrated the music the way it did throughout the song. When you learn the masterpieces of this genre, like Layla, Light My Fire, A Day In The Life, and others immerse yourself in them for total absorption. When you do, you will emerge a much improved guitarist.