The Beatles created some of the most memorable music in history. It's no wonder that guitar tabs for their songs are still in demand. The following three sets of tablature will give you a head start in learning The Beatles catalogue. Lyrical cues are given at the start of each verse and chorus so you know where you are in the song.

Written by John Lennon (though credited as Lennon-McCartney), this Beatles classic served as the title track for their 1965 album and movie. The song reigned at number one on the charts for three weeks. 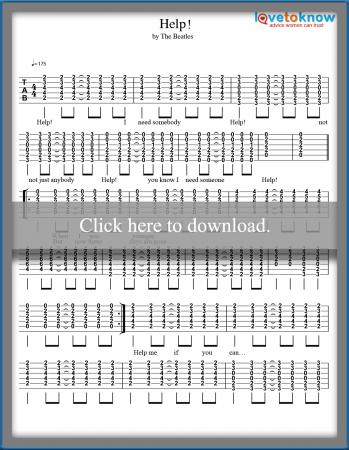 Click on the image of the song to download a PDF. See Guide for Adobe Printables for help with downloading the file. Lyrical cues are given at the start of each verse and chorus. Its chord progression includes simple chords for beginners, but its deceptively fast tempo means rapid, precise strumming for the right hand, which might take time to master.

Written by Paul McCartney (though credited as Lennon-McCartney), Let It Be was released in 1970. The song was inspired by a dream Paul had in which his deceased mother Mary came to him and spoke comforting, reassuring words to him about the pending breakup of The Beatles. 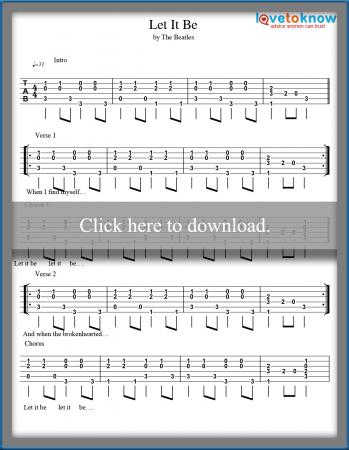 This is an excellent Beatles song to learn for beginners who are still developing their fingerpicking and chord changing skills. The slow tempo gives you plenty of time to change chords, and the song uses very simple chords.

Written by Paul McCartney (though credited to Lennon-McCartney), Can't Buy Me Love was released in 1964 on the classic album A Hard Day's Night. 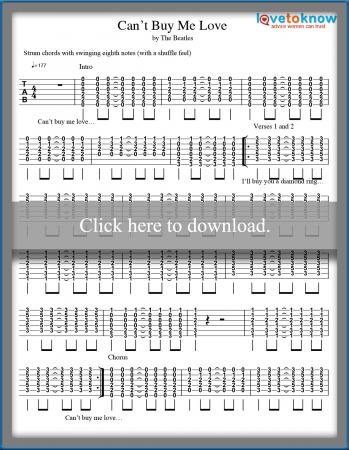 This song is closer to the intermediate level player. It uses a fast shuffle, which can be a challenging swing-like rhythm to master, and it requires bar chords (F7 and C7) that can tire the hands out for beginners. However, it is an absolute blast to play.

The Beatles Tabs for Guitar

If you'd like to explore more Beatles tabs, these resources will give you plenty of places to search for more Fab Four classics.

Popular guitar magazine Guitar World offers up a nice selection of tabs for some of the better-known Beatles' tunes, including Oh! Darling, Norwegian Wood, and Helter Skelter. The only downside to this seven-page collection is it's not divided into chords and tabs. They are all listed together. Be sure to check the brief description under each title to ensure you're getting tabs for your chosen song.

AZ Chords has a huge list of tabs for songs by The Beatles, and these are sorted alphabetically. You'll notice that there are several different tabs for many titles. The tabs are user-generated, so each one will be slightly different. Try several of them to see which ones you like best. As you search, look for light blue song title links that indicate tabs rather than chords.

Another site that offers user-generated tabs, Ultimate Guitar contains tabs for nearly every Beatles tune. You can view tabs by entire album or by song, and both are listed alphabetically.

Sometimes it's worth paying some money to get professional tabs. Music Notes offers a variety of Beatles tabs at various price points. You can choose printable tabs with online instruction videos or digital tabs for beginner guitarists. While not all songs by The Beatles are offered, the site covers some of the more popular tunes such as Ob-La-Di Ob-La-Da, Twist and Shout, and Eight Days a Week.

There are plenty of quality books with Beatles tabs as well. Here are some of the better ones.

A New Way to Appreciate The Beatles

The Beatles combined chords and melodies in a way that changed the course of music history, and their simple but brilliant songwriting shines even brighter when you learn to play them on the guitar.

0
Comments
© 2006-2020 LoveToKnow, Corp., except where otherwise noted. All Rights Reserved.
The Beatles Tabs