While many musicians have dreams of rock stardom, Nate Perry, a Los Angeles-based bassist and composer, is a bit more practical. It isn't that he's opposed to super-stardom, screaming fans and mass appeal. It's that he is more realistic and views music as a profession - one at which he is particularly skilled.

Getting Started as a Working Guitarist

Love To Know (LTK): Nate, what does it take, broadly speaking, to be a working musician? What innate or learned qualities are essential for success?

Nate Perry (NP): Qualities and traits that are considered desirable in other fields are equally so in music: reliability/dependability, punctuality, flexibility and being someone who is easy to get along with are all essential to continuing to get hired. You may initially get a break or a friend might refer you and help you out, but if you are a flake or a drag to be around, you won't get called back. It's as simple as that. It is essential to have pro gear, in other words, a decent collection of high-end tools (instruments, amplifiers, etc.) that are right for the job. "Success," especially in terms of the music industry, is a rather subjective word, but if you mean working and getting paid to play your instrument in a somewhat desirable situation, you really can be successful. There are a few essential qualities besides the ones already mentioned that can really help you achieve lasting success.The ability to play a variety of musical styles authentically and true to form is essential, as is playing the right part for the song as opposed to trying to show off your musical ability or 'chops'.

LTK: Which formal education is worthwhile and which is a waste of time and money?

NP: That's a tough one. Considering that most of my own and many other musician's idols never went to school or had any formal training, it's easy to dismiss it as unnecessary at first. For me personally, I got my B.A. in music when I was 20 and moved to L.A. shortly thereafter. I quickly started playing in a relatively established local band, playing all the clubs etc. and doing small tours. In all the years that I have been involved in music professionally, I could probably count on one hand the number of times I've been required to read music for a gig or on a session or commercial. However, it also depends on which part of music you are trying to break into. Even though I have formal jazz training, with the exception of a lot of jazz gigs early on and some work on cruise ships (brutal), it hasn't come into play much in the music I've been involved with. In many ways, I have had to dumb it down and simplify my approach. I think it all depends on the player. Some of the best musicians I've ever played with never had any formal training, while some have; some of the worst I've played with have spent years in music school only to come out with virtually no real style or feel and virtually no clue. I am finishing my master's degree right now, but that is because I am interested in teaching at the college level at some point, so it's necessary if you're interested in teaching on any level. 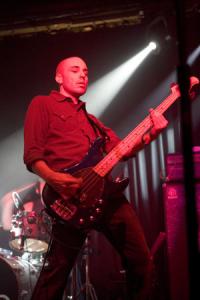 LTK: Which areas of music are particularly lucrative for a working guitarist or any musician?

NP: Well, not performing, unless its with an artist with a big budget, i.e. big ticket artists who are touring well. Those gigs are difficult to get, and competition for a gig like that is fierce. Honestly, writing is and always has been where it's at. Having writer's and publisher's share on a song that ends up getting some decent TV, film or commercial placement is going to pay far more than a performing gig ever would. Average scale for rehearsals and shows, at least in L.A., hasn't gone up a whole lot in the past ten years anyway. From no-name artists to higher profile artists; it doesn't change much as far as pay.

Even if you were playing with different artists seven nights a week in L.A., and to do that you'd have to be selling yourself out playing with some pretty bush league projects to work that often, you still wouldn't make very much money. Maybe $200.00 a day at most. Honestly, in L.A. anyway, some of the best gigs to get as a performer are backing up actor bands or bands made up of rich kids who are trying to live the dream. Sounds kind of cold, but it is true. There are countless songwriters and musician/actors in town who have the money, resources and connections to make a fairly good run at things, at least locally. For a little while, they usually have the money to pay musicians well to help them live their short-term rock 'n' roll dreams. Back in the days of big record deal advances and production deals (when producers would take on a new artist on spec in the hopes of securing them a record deal and getting a portion of the deal and points on the records) there was more money to be had backing artists like that. Now though, there is just far less money than there was 10 or 15 years ago. The days of large advances from record companies for signing new artists are gone, and rock bands, or rock music as a whole, have been marginalized beyond belief. So, freelance musicians need to get more creative. The most lucrative work, besides being lucky enough to be touring with a well-known artist, is union work playing for symphony orchestras, musicals and theatrical productions. Most of the work in rock music is almost entirely non-union, so you've got to be a good negotiator.

LTK: Where can new musicians break into the industry?

NP: Things have changed so much since I came to Los Angeles in the late '90s that it is hard to say. If a young musician wants to "break in" and doesn't mind playing for free for a while, I think the best bet is still to try and go on as many auditions as possible for somewhat established local bands. Getting in a local band that is playing out often and getting on decent shows is the best way to meet other musicians, producers, engineers and other 'industry' types. It has always been so much about who you know, and getting a referral from another musician, contractor or a producer/engineer is still the primary way you will get work.

LTK: Which projects have you worked on that you are particularly proud of?

NP: I am proud of just about everything I have been a part of and grateful to have had the work and experiences. The stuff I did with Manic while we were on Interscope and the two EPs Floorboards and Another New Home are work I am especially proud of, especially on an artistic level. That ended up being a pretty disappointing experience, though, due to the fact that we were a band with a lot of promise, but far too sophisticated an artistic vision to be adequately understood and, subsequently, marketed/pushed by a major record company. So ultimately, we made something we were very proud of and like so many bands, it just sort of died on the vine. I learned a lot when I worked with Joe Don Rooney of Rascal Flatts fame on a band he was producing called Stars Align. I recently worked with a band called No Tomorrow featuring Darrel Hebert, former guitarist of the Toadies and Mitch Marine, drummer for Dwight Yoakam, and it was a privilege to work with musicians of their caliber. I love playing all kinds of music.

LTK: What's the biggest mistake that a guitarist who is just getting started can make?

NP: That is a hard question because there are no steadfast rules. There are so many different roads you can take to reach the same end point, and what works for some may not work for others. I would say that if you are just started, you need to try to play with as many musicians and projects as possible. Try to get into situations where you're playing with people who are better than you and more experienced than you because you will have to work to play up to their level; you'll get better in the process. You'll also meet a lot of people that way which can always lead to meeting other people and getting other opportunities. All of that being said, once you gain a little experience, I think it is important to be selective about what you get involved with and try and avoid projects and bands that are going nowhere. There are plenty of those dead-end kind of situations that can sap a player's time and energy. After a while, just taking any gig that comes along can result in having a bunch of really lame, depressing, soul-crushing gigs - none of which result in any real career progress for the musician. So a big mistake is not being selective enough when getting involved with things. I understand that everyone needs to pay the bills, but for me anyway, I was never willing to play in a wedding band or some lame cover band in a bar to make ends meet. When taking projects, I've always tried to get involved with things that I felt would help me progress both professionally and, in the best case scenario, artistically as well.

LTK: Which types of music would you play if it were up to you? How does this compare to what you normally end up playing?

NP: I have always been a writer as well as a player, and have contributed to the song writing process with many of the projects I've been involved with so that is always the ideal situation. I prefer to play music that I write on my own, but I have always been too lazy to start my own project from the ground up and have usually just stepped into situations that were already up and running and established. The drawback of that kind of situation is relinquishing some or all artistic control, and then it becomes a thing where I'm playing what I am told with no input. It is far more rewarding playing music that I had a part in writing as compared to some of these things I have played in where I think the material is sort of lame, but I am doing it for the money. Ultimately, I try not to play in projects that I simply think are terrible. To me, it would take a good amount of money for that to be worth leaving the house for. It has to be an opportunity to back a big name touring act or something where good pay and travel is involved, in which case I'd pretty much play in anything regardless of the music because I'm basically a mercenary like that.

The Real World of the Music Business

Nate Perry has experience in the trenches of professional music that will light the way for you if you are planning a career in music. LoveToKnow thanks Mr. Perry for his expert insight and brutal honesty about the world of the music business.