For decades, Yamaha has been known as a respected manufacturer of high quality guitars, and the models they offer are quite diverse. You'll find everything from steel-string dreadnoughts to nylon-string classical models. If you enjoy playing plugged, you'll be glad to know that Yamaha also offers electric guitars to fit any budget.

Yamaha is a huge multinational conglomerate that manufactures everything from musical instruments to motorcycles to electronics. The company, based in Japan, got its start in 1887 when Torakusu Yamaha repaired a broken reed organ, then built a reed organ of his own. Ten years later, in 1897, Yamaha founded Nippon Gakki Co., Ltd. to build and sell musical instruments, and the company became Yamaha Corporation in 1960.

In 1900, the company began manufacturing upright pianos for sale. The company started the Yamaha Music School in 1954 and began making electronic organs in 1959. Since Yamaha has been grounded in the business of making musical instruments since its inception, it continues to prioritize the availability of a wide range of quality instruments at multiple price points for customers to enjoy.

A Market for Guitars

Yamaha entered the guitar market in the early 1940s and by the end of the decade, the company had built a factory exclusively for the manufacture of guitars. Yamaha guitars are celebrated for their high quality and excellent value while remaining affordable for all kinds of musicians, from beginners to professionals.

Yamaha brought several innovations to the table, which contributed to the overall development of the guitar. These innovations enhanced the flexibility of the guitar by improving its construction and developing new technology and features.

The Yamaha SG-2000 incorporated two important innovations that were spearheaded by Carlos Santana. Yamaha built Santana a custom model, and Santana came up with two major improvements. One of these was the sustain plate, a brass block built into the body of the guitar and joined to the bridge to enhance sustain. The other improvement, the T-Cross System, joined mahogany wings to the maple body, resulting in a sturdier solid-body construction.

In 2001, Yamaha introduced the Silent Guitar, one of its most creative innovations. Though the guitar has a full-sized neck, the rest of its construction is minimalist. It was designed for musicians to either plug headphones directly in for quiet practicing or for musicians in the studio to plug the guitar directly into a sound system.

A number of well-known guitarists over the years have chosen Yamaha models, whether for performance, recording, or both. Country Joe McDonald played a Yamaha FG-150 at Woodstock in 1969. Bob Seger did most of his shows in the 1970s with a Yamaha FG-1500. Other artists who have preferred Yamahas include Rick Springfield, Richie Sambora, Bob Marley, John Denver, Paul Simon, Robben Ford, and Paul Barrere of Jethro Tull.

Yamaha has a variety of quality guitars to offer, including acoustic, classical, and electric models. Some models are geared toward beginners while others are geared toward more advanced players. You'll find guitars all across the price point spectrum, as well.

If you're looking for a jumbo-bodied acoustic guitar with a powerful sound, look no further than the LJ16. You'll find this guitar on Alternate Tone's list of the 10 best Yamaha acoustic guitars for 2017. Play Acoustic Guitar calls the LJ16 a "curvaceous beauty," both with regard to its appearance and its tone. The guitar costs around $800 and offers a sumptuous buffet of quality features.

The FG830, one of Yamaha's best all-around acoustic guitars, is praised by Guitar Fella as an affordable guitar that "exceeds all expectations" considering its price range, which is around $300. While it's an outstanding entry-level instrument, it's also well-suited for all levels of guitar players, from beginners to intermediate guitarists to more advanced musicians.

If you're looking for an acoustic-electric guitar that's light and easy to play, you'll want to check out the Yamaha APX500III, which costs around $300. Guitar Fella lists the APX500III on his list of the top ten acoustic guitars for beginners, and Best Acoustic Guitar Guide praises the guitar for its excellent "value to money ratio."

For classical guitarists, Music Radar highly recommends the nylon-string CG122MS, saying that Yamaha's focus on quality and detail makes the guitar look, sound, and feel like a more expensive model. While beginners will certainly appreciate this guitar, intermediate and advanced players who want a less pricey classical instrument will enjoy it, too. You can pick up one of these guitars for about $220.

Guitarists who love the jingle of folk music will want to take a close look at Yamaha's FG820-12 folk acoustic twelve-string guitar. The FG820-12 is recommended by Dawsons Music as an excellent first guitar for musicians who are interested in learning to play a twelve string. You can get one of these guitars for about $330.

If you're in the market for a good quality, budget electric guitar, you'll want to check out Yamaha's Pacifica series. Guitar Adventures gives these guitars high marks, ranking them alongside the Fender Squier series for offering good value for their price point. Guitar Fella includes the Yamaha PAC112V in his list of the best electric guitars for beginners. This guitar will cost you around $300.

Guitarists searching for a higher-end electric model will find much to love about Yamaha's Revstar series. Yamaha launched the series in 2015 to celebrate fifty years of manufacturing guitars. The Revstars are stellar quality instruments, and to design them, Yamaha solicited input from professional musicians. You can purchase a Revstar RS502T for about $670. 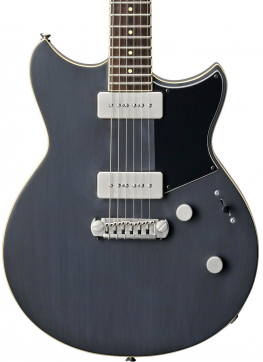 Experienced musicians who don't mind shelling out a high price for a top-notch electric guitar will want to check into the Yamaha SBG1820. You can order one of these instruments online for around $2,700. Handcrafted in Japan, the SBG guitars are updated versions of the legendary SG guitars that were made famous by Carlos Santana.

Over the years, Yamaha has earned a solid reputation for making high quality musical instruments, and their guitars are no exception. Regardless of your preferred genre, your skill level, or your budget, chances are excellent that you'll find a Yamaha guitar that's just right for you.