There are a number of reasons to learn the notes on the guitar. If your goals include reading, composing, arranging, or playing with other skilled musicians or singers, knowing the language of music is extremely important. Once you gain an intimate knowledge of your instrument and the notes as they appear on it, your musicianship will grow by leaps and bounds.

The four examples in this printable will serve as the basis for this lesson. To print, click on the image. If you need help, consult this Guide To Adobe Printables. 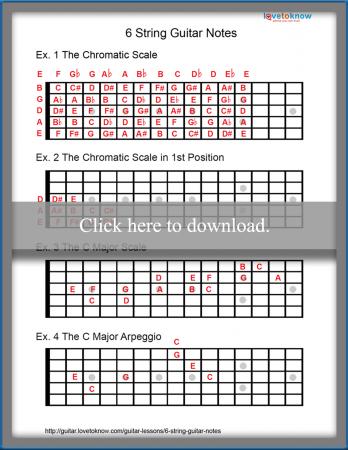 The open strings of the guitar in standard tuning from low to high are E-A-D-G-B-E. Example one shows every note on the guitar on the first twelve frets. On alternate strings, the accidentals are called either sharps or flats to illustrate the enharmonic equivalents, which are the sharps and flats that are the same note. For example A# = Bb, C# = Db, D# = Eb, F# = Gb and G# = Ab. There are no sharps or flats between B and C or E and F.

Practice Ideas for Example One

Practicing the first example can help you learn the notes. 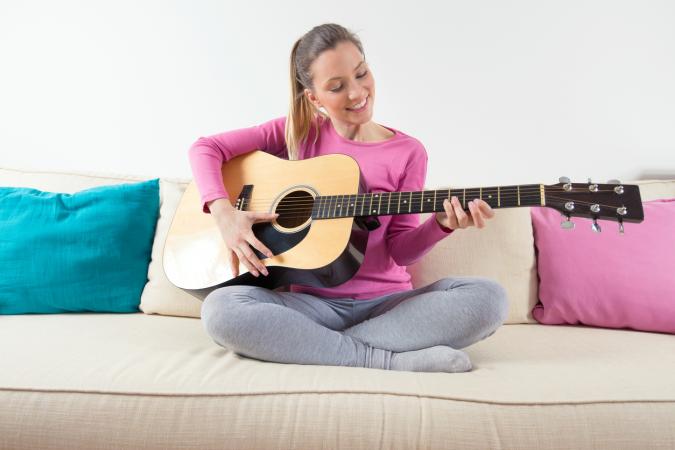 In example two, the notes on the entire guitar are broken down to a one octave scale in the first position. This illustrates the point "everything is everywhere" on the guitar. In other words, any phrase, lick, riff, melody, or chord can be played anywhere on the guitar since the 12 notes of the chromatic scale exist everywhere and in every position on the fret board.

Example three depicts the C major scale, C-D-E-F-G-A-B-C, in two octaves. Example four shows the C major arpeggio, C-E-G, in two octaves. Scales and arpeggios, whether they are major, minor, or otherwise, are the basis for melodies. Practicing and learning musical constructs like scales and arpeggios has many benefits in addition to learning the notes, including improving technique and accuracy, improving your ear, and helping you gain fluidity in your playing.

Learning guitar notes is a very big topic, and the exercises above serve as a starting point to get you thinking about, seeing, and hearing the guitar in a new and exciting way. Learning guitar chord progressions is another excellent step for beginners. If you don't already, start to learn how to read standard music notation. Reading music will enable you to learn more music faster and bring many of theses ideas together.