The following exercises will help you on your way to doing everything rhythm and lead guitarists do, such as playing melodies, chords, arpeggios, and scales faster. It is essential that you use a metronome with every exercise. Speed is a relative thing, and the metronome helps solidify the concept. Two-hundred sixty beats per minute may be fast to some guitarists, while 120 beats per minute seems fast to others. The keys to acquiring speed will be patience, going faster in small increments, and the belief you can do it.

Eight Ways to Get Faster

The following printable contains exercises to increase guitar speed. To print, click on the image. If you need help, consult this Guide To Adobe Printables. 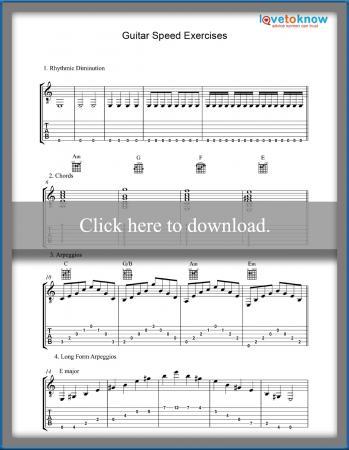 When you diminish something, you make it smaller. Exercise 1 breaks down the simplest note values, starting with the whole note and cutting them in half until you get to the sixteenth note. To really start to understand what fast is, you need a perspective on tempo and the way each note value relates to it. Regarding your picking, with each of the following exercises you should use all downstrokes and alternate or down-up picking.

Listening to any variety of styles, such as jazz, Brazilian, punk, rock, and more, you know the importance of keeping the groove as a rhythm player. With any chord progression, you already work on bringing up the tempo until it's comfortable, and your hands are in sync.

Guitarists from the beginning of the instrument have "arpeggiated" the chords to songs. Jazzers, classical cats, bluesmen, folk rockers, and studio pop aces alike use this technique.

When you've listened to fast guitar players who play at crazy fast tempos with ease, you may notice they play all over the neck of the guitar from low to middle to high. The three octave E major arpeggio in exercise 4 is a great way to start seeing the range of the guitar while increasing speed.

When you hear your favorite guitarist rip off an impossibly fast lick, chances are she played it before. Most likely, it came from a scale and is a pattern on a scale. For the purposes of these exercises, the A blues scale, will serve as the basis for pattern-based exercises. Keep in mind there are dozens and dozens of scales to master.

The Need for Speed

Music is an aural art form. You heard a virtuoso play something uptempo, you liked it a great deal, and now you want to participate. Taking a Zen approach to playing fast will serve you well. Come at this as if you are in the "beginners mind" and know nothing about the subject. Take your time and work hard. The results will be worth it. Remember, when greats like Pat Martino, Jimi Hendrix, Jimmy Page, Stevie Ray Vaughn, and John Williams started playing, they couldn't play fast. Yet.