When you understand and speak the vast language of harmony, the guitar is like a symphony you can take with you wherever you go. Chords can define a songs mood, style, genre, and even the era it came from. The guitar chord progressions presented in this article will give you a solid understanding of how chords work in blues, spirituals, standard songs, folk, jazz, Brazilian music, reggae, and Latin and classic rock.

A Great Place to Start - The Blues

A seemingly endless wellspring of inspiration for over a hundred years, the chords to the blues are an essential component of any guitarists repertoire. Artists who have played this music range from Muddy Waters, to Duke Ellington, to Jimi Hendrix, and beyond. The following standard 12-bar blues progression is used in many famous songs including the Robert Johnson classic Sweet Home Chicago.

Please Note: For all the chord progressions in this article if there is one chord in between the brackets, for example | E7 | that means the chord gets four beats. If there are two chords in the brackets | Cm F7 | it means each chord gets two beats.

Certain blues songs like Sweet Home Chicago can be a joyous celebration of life. As the great B.B. King taught in his masterpiece, The Thrill is Gone, it can also be a sad, sorrowful cry.

The blues are really a form of folk music, a music of the people. It originated from spirituals, which were the religious songs of African Americans in the southern United States. One of the really beautiful spirituals, This Train, follows this 16 bar chord pattern:

The great folk singer and songwriter Woody Guthrie was writing, singing, and traveling America around the same time as Robert Johnson was singing and playing the blues. The basic chords they used were similar. Woody's biggest hit and one of the most performed songs in history, This Land Is Your Land, uses the same chords as the blues and This Train but in this slightly different order:

Reggae - The Folk Music of Jamaica

Folk music often contains social and political commentary wrapped up in a great sound that's easy to play, sing, and understand. Reggae music, which came to be in the late 1960's, certainly fits all those criteria. The guitar chord progressions of reggae often included color tones like the 7th and 9th, borrowing a bit from the blues and jazz. Reggae superstar Bob Marley's 1978 hit Jammin follows a simple four bar repetitive pattern with a variation.

All the above progressions are available in the easy-to-read printable below. To print click on the image. If you need help, consult LoveToKnow's Guide To Adobe Printables. 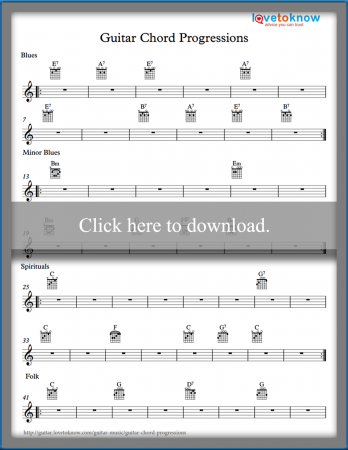 The Latin influence in popular music started way back in the early days of jazz. Band leader and composer Tito Puente's biggest hit, Oye Como Va, is a great example of a simple "vamp" type tune that features Latin rhythms. A vamp is a short chord progression, usually 2 or 4 bars long that repeats, while singers sing and instrumentalists improvise over it. Rock guitar virtuoso Carlos Santana's terrific version of Oye Como Va is still in heavy rotation on classic rock radio. 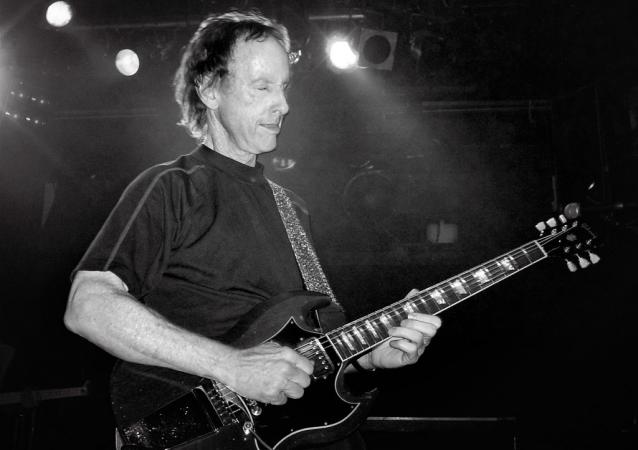 The sound of 1960's classic rock is exemplified by the seminal band the Doors. Their first and biggest hit, Light My Fire, is a guitar chord progression tour de force. Using a Bach-like chord cycle on the intro, a completely unique pattern in the main body of the song, and a vamp section for extended solos inspired by John Coltrane's version of My Favorite Things, this sophisticated and timeless song is a great stepping stone for guitarists looking to take their chord playing to the next level.

Jazz players love to improvise on standard songs. The chords in standards like Alone Together are very colorful, utilizing extensions like the flatted 5th, 9th, and major and minor 7th to increase the voice leading and tension and resolution in the progression. These more advanced chords are a big step up from folk, blues, and rock chord progressions, and the accompanying video is a nice visual introduction to these guitar forms.

Brazil and The Bossa Nova

Antonio Carlos Jobim was a master composer, pianist, guitarist, and songwriter, and his guitar chord progressions are truly unique. The chords to How Insensitive, which is loosely based on Chopin's Prelude No. 4, are a great example of the descending bass line, a technique used by composers in many genres.

Jazz saxophonist Joe Henderson's 60's classic Recordame (Remember Me) is another masterful guitar chord progression, combining vamps, the ii - V - I progression and the Bossa Nova rhythm. The contrast of the opening vamp section and the following eight bar section featuring the harmonic motion and key changes is a perfect example of tension and resolution.

Suggestions for Mastering These Progressions

Above are a number of different chord combinations and quite a few different styles of music. Here are a few more ideas to get inside these wonderful songs.

Painting With Many Colors

An artist has a palette with the basic colors of the rainbow. When she mixes the basic colors she gets many new hues, the pastels and "in between" colors. A musical artist has chords in his harmonic palette. Triads are the basic colors, and when you add extensions like the 6th, 7th, 9th, 11th, and 13th and raise or lower them you have the entire rainbow, as well. Keep practicing and keep painting.