If you love playing the guitar, perhaps you've thought about writing songs on your favorite instrument but are hesitant to try it. Take heart. Even inexperienced guitarists can learn to write a song. Songwriting can open up exciting new levels of creative possibilities for you with your guitar.

Start With Chords or Melody

Perhaps while strumming your guitar, you've stumbled onto a catchy chord progression, or maybe you're hearing a lilting melody in your head that begs for chords and lyrics. Either chords or melody can serve as a good foundation for a new song. Once you have found a musical motif that inspires you, you can expand on it by building on it musically, structuring it into a song, and adding lyrics that work with your music.

If you have a good idea of what you want your song to be about, then lyrics can serve as a strong starting point for a new song. You might also have a poem you've already written that you would like to set to music.

Two musical components are integral to creating a song on your guitar: the chord progressions and the melody. The chord progressions are what you'll play on your guitar, while the melody is what you'll sing. You might want to record yourself playing as you compose, whether by using an app on your smartphone or free music studio software for your computer, so you won't lose what you come up with.

First, you need to decide the key signature in which to compose your song and whether you want the song to be in a major key or a minor key. If you're writing an energetic, upbeat song, you'll probably want to choose a major key, while a sadder, more introspective song might be better served by a minor key. Since some key signatures are easier to play on a guitar fretboard than others, keep a guitar chord chart handy while experimenting with different chords and chord progressions for your song.

While you're playing around with chords on your guitar, you're bound to discover a chord progression that hits home with you. At that point, while you play the progression and perhaps a few guitar licks, see if you can hear a melody in your head as you're strumming. If you've already written lyrics, speak or intone them along with the chords to see what pops up in your mind. You can also start with a melody as the initial building block of your song and go from there. 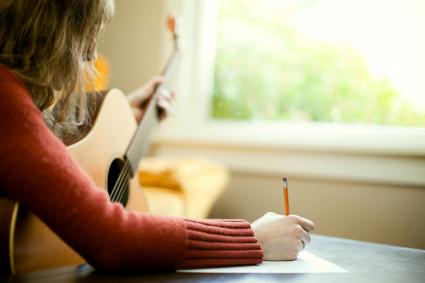 Songs share in common a number of important and recognizable structural elements. These elements represent guidelines rather than a rigid formula, but to create a song that speaks to your heart and to the hearts of others, you'll want to include some variation of these.

Consider writing an introduction to your song, commonly known as an "intro." While not an absolute necessity, an intro will offer listeners a tantalizing foretaste of what's to come in the main body of your song. Well-written intros identify a song to listeners within the first second or so of its playing. To help fuel your creativity, check out some of the greatest rock music guitar intros of all time.

While verses are essential to your song, it's up to you how many of them you want to include. Many of today's pop songs feature a two verse structure. Regardless of how many verses you decide to write, be sure to use them to develop the theme of your song, both musically and lyrically. For each verse, try penning four lines of text with a rhyme at the end of the second and fourth lines.

Of all the structural elements that comprise a song, the chorus is supposed to pack the biggest punch, so give it all you've got. It's the part of your song to which people are most likely to sing along, and it's also the part that will tend to be the most recognizable to listeners. Lyrically, your chorus will encapsulate, in a catchy way, your song's message. Musically, a chorus usually features a song's strongest musical hook.

Bridges, also called middle-eights, are not required in songs, but they can provide a welcome musical and lyrical shift. Usually, bridges are included after the last verse and before the final repetition of the chorus. A bridge can heighten the emotional stakes for your listeners leading into the last iteration of your chorus. Your bridge might feature lyrics that examine the message of your song from another angle. The music for the bridge should reflect this shift as well, perhaps by using a new chord progression with a fresh melody.

As you experiment with songwriting on your guitar, you don't always have to stick to a traditional verse-and-chorus structure. If you like, you could end your song on a verse instead of a chorus, or you could go without a chorus, repeating your verses and increasing their power and intensity, as Simon & Garfunkel do in their smash hit song Bridge Over Troubled Water.

Whether you start your songs with lyrics or add them later, there's an art to writing good lyrics and making sure they complement your music and its overall mood and message. Your lyrics can be poetic, philosophical, or confessional in nature, or they can tell a story complete with characters in interesting situations. It's up to you.

The most important quality of lyrics to any song is that they be singable. You don't want to cram so many syllables in your lyrics that you're struggling to fit them into the melody you'll be singing. By the same token, you don't want too few syllables. Pay careful attention to phrasing as you work on combining music with your lyrics. It might take a few drafts until you find something that works well.

Make your song's title something memorable that speaks to the message or theme of the song. You could get your title from a lyrical hook you've written into your chorus. On the other hand, you could build your whole song starting with nothing more than a title. There's no right or wrong way to write a song. Songwriting flows organically from inspiration, and you can find inspiration in all kinds of places, whether from music, words, feelings, or ideas.

After you've written your first song, keep going and write another, and then another. If you want to be a good songwriter you have to work at it. As with any worthwhile endeavor there's a learning curve, but the rewards are well worth it. Creativity gives a tremendous amount of satisfaction, and time spent expressing yourself musically with your guitar will never be wasted.