Knockin' on Heaven's Door is one of Bob Dylan's most recognizable songs, and it's also one of his easiest. Use tablature to play the song and get some fingerpicking variations to spice things up.

The following downloadable PDF shows the chord names and tablature for playing this Bob Dylan classic. If you need help printing this song, visit the Guide for Adobe Printables resource for assistance. 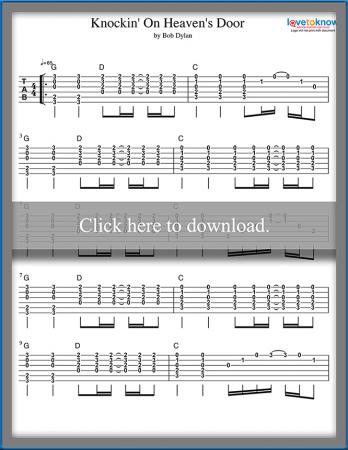 Keep the following tips in mind as you learn this tablature.

If you are using a steel-string acoustic, strumming with a medium or heavy pick sounds best with this song. However, the tablature has arpeggios on the C major chords that allow for some variation. These arpeggios are best played fingerpicking style similar to how a folk or classical guitarist would play. If you're not skilled enough to do arpeggiated picking or fingerpicking, you can simply follow the chords above the notes and maintain the same strumming pattern for the C chords. The fingerpicking is only a suggestion.

Although it's a simple chord progression, the slow tempo can be challenging to maintain consistently. In the general world of musicianship, slow tempos can be notoriously difficult to play accurately without speeding up. If this proves difficult, you can practice strumming any chord you choose to the click of a metronome at 65 beats per minute before you take a crack at this song. It may take several hours-worth of practicing to a metronome before you become consistent in your tempo.

When playing simple chord progressions, don't be afraid to experiment. The tablature is meant as a starting point. You can play with the chording by adding or taking away fingers here and there to create interesting chord colors such as major sevenths (by removing the index finger from the C chord) and major ninths (by removing the middle finger from the D major chord). This is one way you can add your own personality to a classic but remarkably simple song.

The strumming rhythm in the tablature is also just a starting point. It is a basic rhythm that works well with the melody of the song, though it's not necessarily how every performer strums the chords of this Dylan ballad. Feel free to invent your own strumming pattern as you get comfortable with the chords and tempo of the song. You can ignore the notated rhythm in the tablature, but still use the chord symbols at the top of each staff to aid you as you craft your own strumming rhythm.

Knockin' On Heaven's Door proves that it doesn't take a virtuosic performance to craft something with emotional complexity and power. It's a great example of Dylan's motto of having just three chords and the truth. As you learn the song, you will be amazed at how beautiful a few simple chords can sound.